The case of Prostrate perennial knawel: Bringing one of the UK’s rarest plants back from the brink in the Brecks. 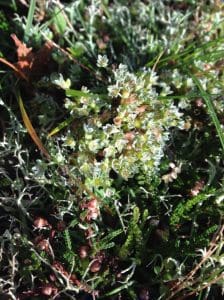 Prostrate perennial knawel (Scleranthus perennis spp. prostratus) in flower, photographed at Santon Track near Brandon, Suffolk, a publicly accessible site owned and managed by the Forestry Commission and open all year round.

This small (if tongue-twistingly named) plant, is globally restricted to the Breckland area of Norfolk and Suffolk – it is found nowhere else in the world!

Unable to compete with other, more vigorous and competitive plants and grasses, perennial knawel (for short!) likes the sandy, nutrient-poor soils of the Brecks heaths and its dynamic, steppe-like climate.

For thousands of years the open, sparsely vegetated heath and inland dune habitats of the Brecks were maintained serendipitously by land uses such as intensive rabbit warrening, mineral extraction, bracken harvesting and stock grazing. Such activity kept swards low, soils poor, and created open areas of bare ground and niches for small, slower-growing plants like perennial knawel to colonise.

Since such land uses have dwindled, so has its available habitat: around 80% of the Brecks heaths have been converted to commercial forest and cropland in the last century and the remaining heathland fragments require ongoing conservation management to keep them as heathland in the wake of traditional pastoral activities.

Recorded at 36 sites until the early twentieth century, perennial knawel has declined to just three! One of these, with just a few hundred plants, represents around 95% of the world population. Elsewhere populations are low and at risk from being swamped by closing swards and the processes of vegetation succession.

But help is at hand! The Shifting Sands project will provide a boost to long-term efforts by concerned charities including Plantlife and the Norfolk Wildlife Trust – two of our Shifting Sands partners. Together we will restore areas of bare ground on sites where the plant once thrived by mechanical means such as ploughing, rotovation and turf-stripping. This will expose the seedbank and should aid re-colonisation. 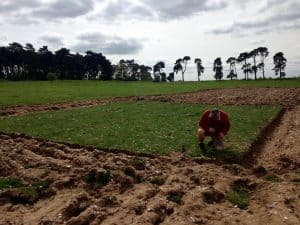 One of the plots we have ploughed in partnership with the Elveden Estate at Deadman’s Grave SSSI and featuring Tim Pankhurst, our Rare Plants Project Officer.
This site is owned by the Elveden Estate and publicly accessible from October to April via the Icknield Way route, reputedly the oldest road in Britain! Note: Deadman’s Grave is closed to the public April – October to protect nesting Stone Curlew from human disturbance – another Brecks species which will benefit from the creation of bare and stony ground – the clue is in the name!

Where extra help may be required we plan to reintroduce the plant using specimens cultivated off-site in the coming years. We will monitor results and share learning with land managers across the region.

Our rare plant conservation work will be aided by the Breckland Flora Group volunteer surveyors – please do get in touch if you’d like to be involved: Phoebe.miles@naturalengland.org.uk

Would you like to help this incredible species? There are numerous ways in which you can: