As part of our Colour in the Margins project, Kew Millennium Seed Bank are working in collaboration with our staff in order that we can work with the seeds of our most rare and threatened plants, with the hope that we may have a beneficial effect on the future of these species.

Dr Kristian White recently took part in one of the rare and wonderful Seed Collection Days that we have in order that you, the public, may take part in this fascinating and magical world of seeds.

Here is his story...

"You have been asked to write an article for the Back from the Brink project describing a recent event you attended.
The event, Seed Collection Training with Kew, took place on Saturday the 14th of July at Fivehead, a small village that you had only ever driven through despite having lived there on and off since the 1980’s.

You feel that what you should begin with is some kind of a ‘calling’, or epiphany, where all of a sudden you became concerned about your environment, global warming, animals, plants; the planet.
The truth is you were swimming lengths in a pool next to a person who does care about these things. She told you about the charity she worked for and asked if you were interested in volunteering for a day to help survey an endangered plant – Spreading Hedge-parsley. You asked her (stupidly, with hindsight) if it meant being outdoors.
She said yes, and so did you.

And why not?  You’d thought.
Since finishing your research of the Freudian concept of ‘Undoing’ in literature – an irony not lost in restoring endangered species to their former glory – you’d found yourself estranged from the thriving social elements of your city life in Brighton and thought it would do you good to get out a bit more. Also, it seemed like a good thing to be doing – balance out the several decades spent hiding your head in screens and being convinced that nothing outside your own existence was really worth bothering with.

Already, you feel like you are digressing too much. The intention of this blog article must surely be to inspire those who wouldn’t normally think to do this – to get out of bed early in the morning and travel to an arable field in the middle of nowhere in the baking heat to search for seeds from plants they’ve never even heard of. Not for you to talk about your own personal relationship with nature – or lack of it. To begin talking about the wondrous plants you are trying to save and tell the reader why Shepherd’s Needle, Corn Buttercup, and Broad-fruited Cornsalad deserve a second chance. What you shouldn’t be talking about here are the kinds of things that might put people off. Like how hard some of these plants are to spot with the untrained eye...

A little after 10am and the representatives from Kew and the rest of the volunteers have arrived. These are people who love the imperceptible things that people don’t always notice, the things that you have forgotten to care about. People that carry small boxes in which to store interesting finds and insects. Who empty their shoes after scouring a field on the chance they will find a rare seed lurking in there somewhere. But perhaps the volunteers that impress you the most are the young. You are taken by their maturity, the fascination and concern they have for interesting and important things that you lacked at that age. A fascination for plant species, some of which appear to you as little more than weeds. Things – that if you are completely honest – you doubt you’d even notice were gone. And sadly, even if you did, you probably wouldn’t genuinely miss.

On reflection, you do not think you can ever become quite like these people. As caring about this environment as these people. Not properly. You are a different species - too far homogenised into a world of social media. And as you look around at the arable fields, you feel as Kuno might have felt in Forster’s novel The Machine Stops, on discovering that he has been lied to; that the air outside of the underground cities of the future is not in fact poisoned; that there are still people living out there in the green hills. People like these, you think, as you navigate between the crops, filling a small cloth sack with small prickly seeds from a Corn Buttercup plant. 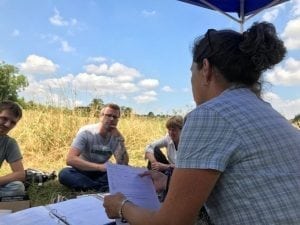 And in this way, you begin to surprise yourself.
Something has happened to you.
The disinterest seems to have waned a little. Not just in these struggling plants and their irresolute offspring, but in everything. You feel that by the very act of having turned up to collect seeds for Kew’s Millennium Seed Bank, in some minuscule way you are redressing the balance a little. You feel yourself starting to care a little more about the species, the creatures, the plants and seeds that you can only see – like them – by getting down on your knees in the dirt and viewing them through an eye glass. And you begin to feel that all this, that life, the world, is not as you thought it was. As one of the managers – the friend from the swimming pool – said before you set off to search for seeds - 'A weed is only a weed because people call it a weed. Somewhere else it is a plant.'"