The heart of Dorset’s heathland is the perfect habitat for reptiles. A rich mosaic of dry, humid and wet heath, bog pools, ponds and grassland, means the Dorset heaths hold an ideal mixture of habitats for these fascinating species.

Lowland heathland has been declining drastically over the past 200 years and now just a few fragmented sites remain providing a stronghold for two of our rarer native reptiles. In fact, all six British reptile species can be found in Dorset, mature areas of heath provide food and shelter, whilst bare sandy areas are essential for egg laying Sand Lizards, and warm south facing slopes are ideal for basking.

Four of Britain’s reptiles can be found relatively commonly throughout England and Wales, these are:

The Grass snake, these non-venomous snakes are very timid, the most aquatic of all the UK reptiles feeding mostly on fish and amphibians. Although other snakes can swim, it’s rare – if you have seen a snake in your garden pond it’ll be this one. The largest of all the UK reptiles, it can reach lengths of well over a meter.

As the UK’s only venomous snake, the adder can be recognised by the dark zig-zag markings down its back. Adders are shy, sensitive and non-aggressive, they will usually only bite if they are disturbed or antagonised and use their venom as the last means of defence. 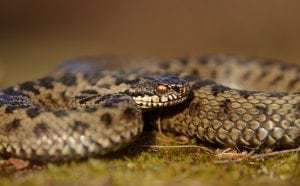 Often mistaken for a snake, the Slow Worm is in fact a lizard. They are very shiny and are usually a greyish brown colour.

The Common Lizard, as its name suggests, can be found throughout Europe, from heathlands to dry stone walls, sea cliffs and embankments.

The remaining two reptiles, the Smooth Snake and the Sand Lizard are specialists of the Dorset Heaths, found naturally in very few other locations in the UK.

The Smooth Snake is Britain’s rarest reptile, it was first discovered in the British Isles in 1852 at Parley Common in Dorset.  This rare and secretive animal is smaller and more slender than other snakes, usually growing to 60-70cm long. It has an eye stripe that extends along the side of the head.  They are generally a grey or dull brown colour with two rows of black dots down their back. The smooth snake rarely basks in the open, instead it shares the slow-worm’s habit of hiding under stones, logs and other debris exposed to the sun. This non-venomous snake feeds mainly on common lizards, slow worms and small mammals such as shrews and rodents. Live young are born in September.

Finally, the Sand Lizard; with its bright green flanks, the male Sand Lizard makes a very striking sight especially during the breeding season in April/May. Sand Lizards usually lay their eggs from late May-end of June. Timing is variable and highly weather dependant. Peak levels of activity can be most noticeable during prolonged warm and sunny spells, often with high humidity. Before laying their eggs, females are increasingly noticeable in areas with open sand such as paths and managed sand strips. They will dig test burrows to assess areas for perfect humidity and temperature. 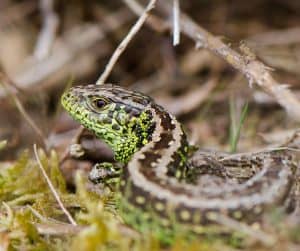 Usually found in the same sites, the Smooth Snake and Sand Lizard are extremely rare and due to habitat loss are only naturally found on protected heathland sites in Dorset, Hampshire and Surrey. Although there is a population of ‘Merseyside’ Sand Lizards on a dune system on the Sefton Coast, part of the Gems in the Dunes Back from the Brink project.

Virtually all the remaining Dorset heathland is recognized as of outstanding nature conservation importance.

What are we doing to help? Part of the Dorset’s Heathland Heart, Back from the Brink project is to create sandy scrapes on a number of sites for the Sand Lizard, vital for basking, finding food and laying eggs. So far a total or 33 large sandy scrapes have been installed by contractors, some attracting Sand Lizards to the patch within hours of creation.

All British reptile species are protected by law in Great Britain, it is illegal to deliberately kill or injure them or to trade in them. Due to their rarity, the Smooth Snake and the Sand Lizard are strictly protected by British and European law which makes it an offence to kill, injure, capture or disturb them; damage or destroy their habitat; or to possess or trade in them.