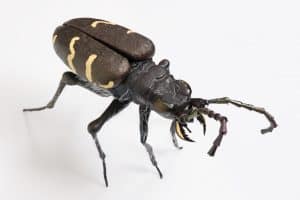 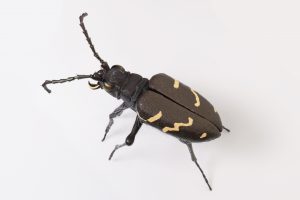 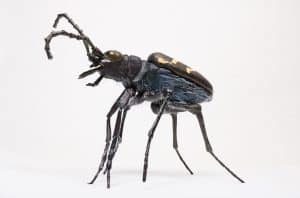 Heath is an incredibly accurate representation and striking 3D model of a real creature we have living on the Dorset Heaths – the Heath Tiger Beetle. He is the culmination of around 150 hours of hard work, and multiple creative processes by 3rd year student, Hope Urbani, on the Model making Degree course at Arts University Bournemouth.

Here are some photos of her process: 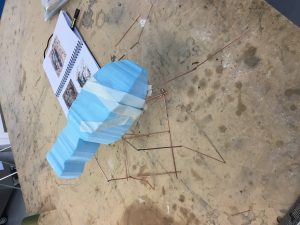 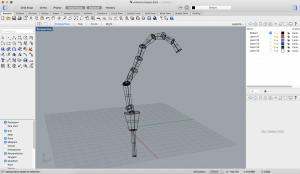 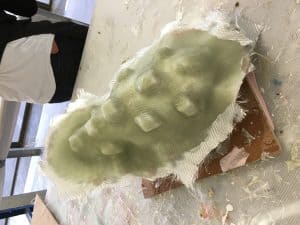 Both parts of the silicone mould for the wings. 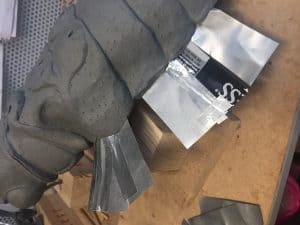 Building the wall to separate the piece into two parts. 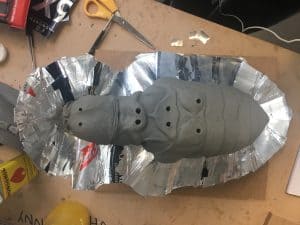 Heath Tiger Beetles are restricted to lowland heathland, in the UK and are now found only in fragmented sites in Dorset, Sussex, Surrey and Hampshire. They have undergone a drastic decline, mainly due to habitat loss and currently have a very high threat of extinction. 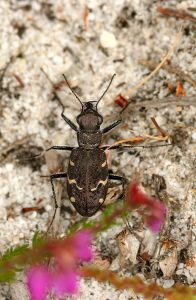 Dorset’s Heathland Heart is carrying out substantial habitat management work, including creating dry scrapes and bare ground on the heaths, on which these beetles and many other of our heathland species rely.
Many years ago, bare ground occurred across the heaths due to man’s activities. Grazing, extraction of sand, clay and vegetation, and access tracks all created a patchwork of microhabitats for niche species, which now need a little help to survive. The project is focusing on a core group of vulnerable heathland creatures that we are bringing back from the brink of extinction.

The adult beetles are most likely to be seen on dry, warm and calm days in the summer, between May and September. During this period volunteers on Dorset’s Heathland Heart Project have, and will be surveying for these stunning critters, as well as some other rare invertebrates, on some of Dorset’s best heathland sites. If you would like to get involved with our group surveys please get in touch with the project, we welcome experienced recorders as well as those new to nature, as training on survey methods will be provided.

We feel incredibly lucky that Hope decided to team up with the Back from the Brink project to work on her final year project. When asked about this Hope said:

“I really enjoy the natural world, so a model with anything to do with animals or their habitats is my favourite kind to make.”

She went on to explain that:

“I wanted to do a more unusual project like this because I really support animal conservation and thought it was sad that the less ‘cute’ creatures like Heath Tiger Beetles often get left behind. Plus, all the bug’s skinny legs looked like a fun challenge to make!”

“Living in a beautiful part of Dorset myself, this was a lovely chance to support a Dorset based endangered animal.”

Hope intends to pursue a professional model-making career when she graduates in a few months.

Dorset’s Heathland Heart, which is led by Plantlife and is part of the National Back from the Brink project, partnered up with the University to shine a light on one of the rare species they are working to improve the future of. You can contact the project to find out more.