One of the key research themes within the Sustainability Research Institute is how to build wildlife-friendly human infrastructure. My PhD project takes this concept one step further. I will be attempting to build houses for beetles.

If I asked you to think about forest insects, what images spring to mind? For many it would be a fearsome tick or a swarm of annoying midges. But, there are so many other interesting and, in some cases, beautiful species hiding just out of sight. 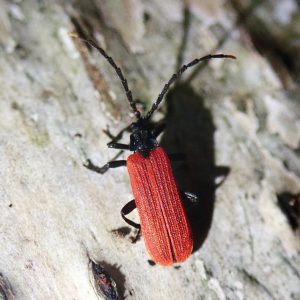 A net-winged beetle (Platycis minutus) one of many of the beautiful saproxylic species associated with our veteran trees. Image by Stephanie Skipp

Among the forest invertebrate fauna is a group termed ‘saproxylic insects’. These insects are dependent upon decaying wood, many of them making their homes inside ancient trees. This community is composed of a wide range of different insect types (or ‘orders’) such as beetles, flies and parasitic wasps, each performing essential functions in the forest that allow the circle of life to keep turning.

By going about their lives and subtly changing their surroundings, saproxylic insects help to recycle nutrients from decaying trees back into the soil. They can also help to protect commercially grown trees from large pest outbreaks. This is because a rich and diverse insect fauna contains plenty of predator and parasite species. These wait in the wings until populations of a damaging pest starts to explode. When this happens they spring into action, feasting upon the pests until their numbers come back under control. 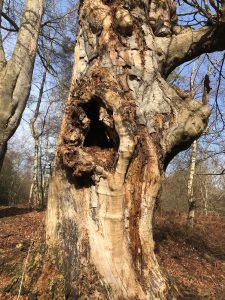 Veteran tree with heartwood decay. A perfect home for many of the saproxylic invertebrates. Image by Stephanie Skipp

The insects that rely upon ancient trees to survive are, however, under threat. Unfortunately, the areas of decay and hollowing that arise in trees as they age are not productive for modern forestry. For this reason, timber industries have moved towards intensive practices such as clear-cutting which maintains a mono-culture of young, consistently aged trees.

Forests containing suitable insect habitat is now at a fraction of the coverage that it once was. During the last century, 38% of the UKs ancient woodland was felled and replaced by plantations. Consequently, many of the rarer saproxylic insect species have become confined to small, isolated sections of suitable woodland, making them increasingly vulnerable to extinction.

My PhD is being run collaboratively between the SRI and the Back from the Brink, Ancients of the Future project. This means that I will be working with Buglife and Natural England to attempt to combat this issue. One way that I will do this is by trialing man-made structures that mimic the habitat of wood dwelling insects. Essentially, I will be setting up the equivalent of bird boxes for beetles – beetle boxes! 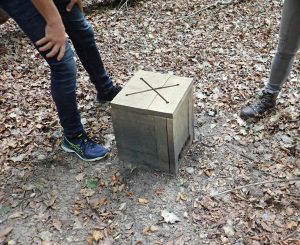 An example of a beetle box, mimicking the habitat found in basal rot holes. Image by Stephanie Skipp

The boxes I am using will be specifically mimicking hollows that form at the base of a tree. This is the habitat of one of the UK’s most endangered beetle species, the Violet Click Beetle. The Violet Click Beetle is an umbrella species, which means that it only uses habitat of the highest quality. By working to conserve it, we can be sure that we are promoting outstanding decaying-wood resources. This will help a whole host of other saproxylic insect species too.

If these beetle boxes are successful, they could be installed more widely in forests across the UK, acting as stepping stones to help vulnerable species travel between isolated patches of woodland. One question remains though: where are the best places to put these boxes?

This leads me to the second aspect of my PhD - investigating the habitat preferences of saproxylic invertebrates. To do this I will use cross-vane insect traps set into a variety of trees. These traps are made of two sheets of clear plastic suspended over a funnel and a collecting pot. Insects unwittingly bump into the plastic while flying around, causing them to fall into the pot below. Analysing the insects I catch will allow me to form ideas on how far different species can disperse. I will also be able to learn whether they prefer to live in trees that are situated openly or in denser clusters. 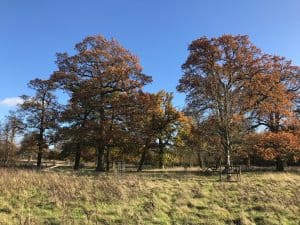 My results will help to inform woodland management of the best places to plant trees (or install beetle boxes) to support their insect inhabitants. Saproxylic insects need all the help they can get in this modern, changing landscape.
I hope that my research will help protect this community and promote the health of our woodlands for years to come.

PhD student for the Ancients of the Future project.