An update on Shifting Sands’ work to save the endangered Breckland Wormwood (Artemisia campestris)...

Shifting Sands is focused on helping the rarest Brecks species including two wonderful plants, Prostrate Perennial Knawel (Scleranthus perennis subsp prostratus) and Breckland Wormwood (Artemisia campestris).
Breckland Wormwood now persists at only two native sites in the Brecks, accompanied at one of them by its close associate the Wormwood Moonshiner Beetle, which munches on its seeds over winter. 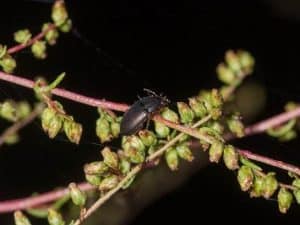 Above: the Wormwood Moonshiner Beetle feeding on the seeds of the Breckland Wormwood plant in October 2018 (Credit: Brian Eversham)

We're determined to help the plant and the beetle through habitat improvements and reintroduction's!
We've spent the last year preparing to restore the sparse, 'skeletal' grassland habitat it requires at one of these sites, the specially designated Artemisia Reserve in Brandon, Suffolk. This involves lots of surveying first, to get good baseline data against which to measure improvements, and to check what other species are present to ensure we don't do anything which would be to their detriment.

The Breckland Flora Group of volunteers have mapped the plants and a few weeks ago a group of volunteer entomologists and enthusiasts undertook a soil survey, sampling at 5 and 10 cm depths to see what hibernating and active insects might be present before groundwork's began. We found 49 species, with a few spiders still to ID. No rarities but not bad for February! 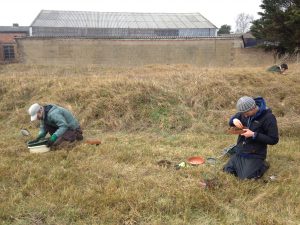 Above: Volunteers undertaking soil invertebrate surveys at the tiny Artemisia Reserve in Brandon in February

Then, with the help of the Breckland Flora Group of volunteers we have undertaken some gentle turf-scraping by hand to opening up the turf around the existing plants to allow them to spread and set more seed. This week the machines have rolled in to finish the job, removing the thick mats of sand sedge from the rest of the reserve. Sedge and coarse grasses quickly out-compete this Breckland specialist. 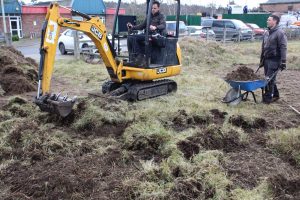 Above: the digger at work, clearing the sand sedge from the areas where no Breckland Wormwood plants are currently growing, so that bare ground is available for recolonisation  (Credit: John Smithson)

It is our hope that the plant will find it easier to spread now the conditions have been opened up.

Meanwhile Cambridge University Botanic Garden have been cultivating the plant off site, using basal cuttings from plants on the reserve. I've grown a few too, in pots on my patio! A nice mix of Brecks sandy soil with lumps of chalk seem to be suiting these little cuttings well. We intend to plant these young plants out in the next two years to bolster the population, into suitable areas from where the plant has recently disappeared and possibly into some other suitable areas which has some physical disturbance but little or no grazing by livestock, wild deer or rabbits, so it can set seed and provide lots of food for the wormwood moonshiner beetle! 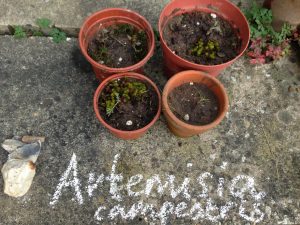 Above: several basal cuttings of the plant growing in pots of chalky, sandy  Breckland soil in the Project Officer's garden! This is a Schedule 8 protected plant - we have to have a license to take cuttings! (Credit: Phoebe Miles)

Please get in touch with the Project Officer if you’d like to volunteer to help save Brecks rare plants and beetles! Phoebe.miles@naturalengland.org.uk