Legend has it that the Pasqueflower comes into bloom on Good Friday. Now these highly specialised plants and many other calcareous grassland species need our help if they are to rise again each year… 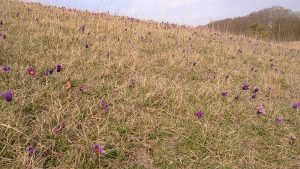 Lying against the south-facing hillside with a mellow wind on my face, I’m supported by ninety metres of chalk. In the Cretaceous Period – the chalk age – the escarpment beneath me was formed as endless layers of micro-organisms floated down to the bottom of a warm sea. Now I see chalk rising to the surface, exposed in shallow scrapes in the rough grass, white nubs scattered amongst thousands of empty heath snail shells (Helicella itala). The chalk cycle fascinates me. There is a deep mineral connection between lifeforms and landforms: the calcite plates of ancient marine creatures transformed into chalk hills are now being reformed by the heath snails that ingest the soil for the calcium needed to produce their whorled shells.

As I reach the summit of Church Hill, the green and white mosaic of grass and chalk is broken by purple flecks as the Pasqueflowers (Pulsatilla vulgaris) begin; just a few isolated colonies, then suddenly the whole hillside erupts in violet profusion, in swathes of uplifted bells. Close up, I can see something of the softness of the chalk landscape reflected in the silky purple sepals, eclipsed by the central golden-yellow bosse with its prominent stamens. The Pasqueflower has many common names – ‘windflower’ highlights its close relation to those other flowers alive to the breezes, the anemones, also members of the buttercup (Ranunculaceae) family. In fact, the Pasqueflower is also known as the anemone of Passiontide (‘pasque’ being derived from Old French ‘paschal’ – ‘of Easter’) referring to the supposed emergence of the bells on Good Friday. This year’s late Easter and warm weather in March means that, as with many other spring-flowering perennials, the Pasqueflowers have arrived early. 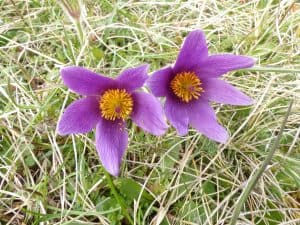 Unimproved chalk grassland sites like this one at Therfield Heath in Hertfordshire are rare habitats these days. Of the 4.5 million hectares of grassland in the UK, just 100,000 hectares remain unimproved, which means they haven’t been reseeded, fertilised or drained. Calcareous grasslands – the common name for species-rich grassland on chalk and limestone soils – are the richest habitat for wild flowers, such as Salad Burnet (Sanguisorba minor), Wild Thyme (Thymus serpyllum), Common Rockrose (Helianthemum nummularium) and Small Scabious (Scabiosa columbaria), with estimates of less than 40,000 hectares of lowland and 25,000 hectares of upland calcareous grassland remaining in the UK. And it’s on these ancient sites, with infertile soil from thousands of years of grazing and trampling, that specialised chalk downland plants and animals have adapted to survive.

Pasqueflowers seed in the bare patches created by grazing, using the silky hairs on their stems and leaves to conserve moisture on thin, dry chalk soils. But their successful adaptation to this land is also what makes them vulnerable – without infertile soil and well-managed grazing, Pasqueflowers and many other chalk downland specialists face an uncertain future. Some calcareous grasslands are threatened with overgrazing from rabbits and even sheep when they are introduced at the wrong time of year, whilst others without any grazing from sheep and cattle lack the bare patches that wild flowers, like the Pasqueflower, require for seed germination. Nutrient enrichment is another modern problem as spray drift from agricultural land and air pollution add excess nitrogen to the soil, upsetting the balance and encouraging more vigorous species to take hold.

Back from the Brink’s Limestone’s Living Legacies project, based in the Cotswolds, is working to conserve some of these rare calcareous grassland sites. In the Cotswolds, these grasslands grow over limestone rather than chalk as in Hertfordshire, and are vitally important as they support a wide diversity of wildlife. The project aims to restore, manage and connect up remaining areas of unimproved limestone grassland, ensuring the recovery and long-term viability of the species that rely on them.
Volunteers are being trained to monitor populations of key species: Rugged Oil Beetle (Meloe rugosus), Duke of Burgundy (Hamearis lucina) and Marsh Fritillary (Euphydryas aurinia) butterflies, Fly Orchid (Ophrys insectifera), Basil Thyme (Clinopodium acinos) and Greater Horseshoe Bat (Rhinolophus ferrumequinum), while the project is also enabling local communities to reconnect with the landscape and its wildlife. Monitoring has already been undertaken on some of these species and scrub removal has begun. Restoring, managing and monitoring unimproved grassland sites like these in the Cotswolds is a crucial part of protecting the UK’s natural heritage, supporting populations of specialist flora like the Pasqueflower and even enabling them to colonise new areas. 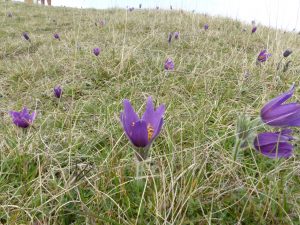 Standing on this Hertfordshire hillside feels secure - I can sense deep chalk all around me - but the existence of the wild plants and animals that have adapted to live on these calcareous grasslands is anything but assured. Church Hill is now an island in a sea of agricultural land, and I can hear the not-so distant traffic over the crest where the parallel lines of the railway and the A505 stand out in contrast to the meandering pathways on the hillside. Chalk and limestone grasslands, and the ecosystems they support might have existed for millennia, but their future is in danger; without the conservation work of projects like Limestone’s Living Legacies, we risk destroying these ancient habitats and losing natural treasures like the Pasqueflower forever.