Back from the Brink is an ambitious programme of work aiming to improve the conservation status of 20 of England’s most threatened species, whilst benefitting at least 200 more. With the support of the National Lottery Heritage Fund and other funders, 19 projects have been established across England, some covering particular geographic areas whilst others concentrate on individual species. Accounts of the projects, and information on how to get involved, can be found on the Back from the Brink website.

RSPB is leading a project on Anisus vorticulus, the Little Whirlpool Ramshorn Snail, at Pulborough Brooks reserve in the Arun Valley, from 2017-2021. The Arun valley is one of the three strongholds for the species in the UK, the others being the Norfolk Broads and the Pevensey Levels.

Anisus vorticulus is a small aquatic snail, rarely more than 5mm in diameter. It has very particular habitat requirements; it needs unpolluted, chalky waters such as marshland ditches, with just the right vegetation. It’s one of the rarest, most restricted and most vulnerable freshwater molluscs in Britain. 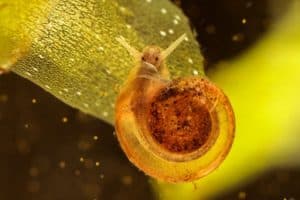 A survey carried out by Dr Martin Willing of the Conchological Society in 2013/14 found the population at Pulborough Brooks was expanding in the north of the reserve but was absent from the southern and central sections. A further survey of Amberley Brooks in 2015/16 found it was only present in 1 ditch. It is evident that the Arun population has greatly declined and is very vulnerable.

The cause of this decline is not clear. Past studies have suggested that the method of ditch clearance is the main problem, as the snail occupies well vegetated ditches and has not recolonised some ditches after clearance. The recommendation has been to leave stretches of ditch uncleared to act as a source for recolonisation. However, even when this management practice has been carried out for many years, it has not prevented the snail from being lost.

This form of ditch management can be problematic for land managers as the uncleared sections hamper water flow and lead to siltation, which is detrimental to much of the wildlife, including the snail. The ditches no longer function as wet fences, enabling livestock to move between compartments.

Through the Back from the Brink project we are testing four methods of ditch management in the hope that one can be found which both conserves the snail and facilitates the wetland management. 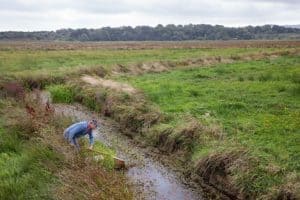 Anisus vorticulus is a European Protected Species and land managers are required to gain a licence to carry out ditch management. Under the terms of the licence they need to follow a ditch management protocol with the options of staggered clearance (whereby alternate sections are cleared and left uncleared); ends uncleared (for ditch lengths <100m) and half-width clearance (for ditches >4m wide). We have set up a replicated trial of each of these and in addition we are testing central channel clearance on the wider ditches.

2018 was the first year of monitoring of the ditch management trial, carried out under contract by Abrehart Ecology. Anisus vorticulus was found in all of the trial ditches and at most of the sampling points, larger numbers were recorded in the cleared parts of the ditch than in the uncleared. The monitoring will be repeated in 2019 and 2020 to see if this is a consistent finding.

In an attempt to improve the status of the snail, we have also created some additional suitable habitat in the form of 9 ditch spurs and 1 new ditch which can be allowed to vegetate up and do not have to act as wet fences or for water flow. These will be monitored in 2020 to see if they have been colonised.

If habitat conditions in the central and southern areas Pulborough Brooks were found to be suitable, we had planned to carry out some trial translocations in 2019. However, assessments in 2018 found many of the ditches had a very impoverished mollusc community, including several species more typical of ponds. Rather than carry out the translocations, we are now setting up water quality testing of the ditches to try to ascertain what the problem is.

The results of this project are being shared with Natural England and the Conchological Society, plus other conservation organisations and land managers with duty of care for Anisus vorticulus. In combination with studies in the Norfolk Broads, it is hoped they will inform future management for the snail.

Anyone interested in learning more about this project should contact the project officer, Dr Jane Sears, at jane.sears@rspb.org.uk.