A previously extinct butterfly has bred successfully in an English woodland for the first time in more than 40 years as part of the ambitious conservation project, Back from the Brink. 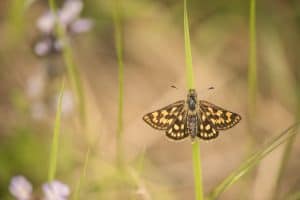 Freshly emerged Chequered Skippers have been regularly spotted over the last few weeks at a secret location in Rockingham Forest, Northamptonshire, and it is hoped they will become the foundation of a new English population of the butterfly.

The butterflies are the offspring of adults collected in Belgium and released at the Northants site last spring as part of the project by wildlife charity Butterfly Conservation, working in partnership with Forestry England. 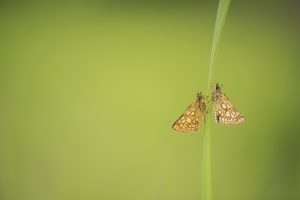 In recent weeks, ecologists from Butterfly Conservation have successfully released a further batch of Belgian Chequered Skippers at the Rockingham Forest site.

It is hoped that the three-year project will build a large, resilient and sustainable population of Chequered Skipper across the whole landscape.

Butterfly Conservation’s Dr Nigel Bourn said: “Seeing my first ever English-born Chequered Skipper, just as we were about to release the ones we had bought back from Belgium was an incredible moment, as a scientist I was surprised by the sheer emotion of the moment.

“I saw in one tiny butterfly the result of so many peoples’ hard work and dedication that has got us to the point where we have achieved this major milestone in the return of the Chequered Skipper to England.

“Reintroducing a species is not a quick fix, and the challenge now is to make sure that woodland management across the landscape can provide the habitats the Chequered Skipper needs into the future.” 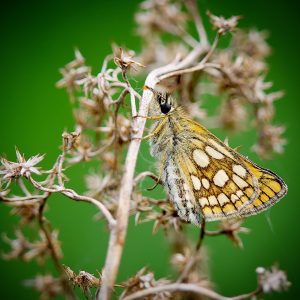 The Back from the Brink project, made possible thanks to The National Lottery Heritage Fund and People’s Postcode Lottery, aims to save 20 species from extinction and benefit over 200 more through 19 projects that span England.

The Chequered Skipper, although always scarce, became extinct in England in 1976 as a result of habitat loss due to changes in woodland management that saw a decline in coppicing and management of long, narrow tracks (rides) and an increase in conifer plantations which were unsuitable for the butterfly. In recent years, Forestry England have adopted different land management practices to help improve wildlife habitats, making them the ideal partner for this reintroduction project.

The Back from the Brink project has been successful in parts of the Chequered Skipper’s former stronghold Rockingham Forest that have been restored by Forestry England to ideal conditions with wide, flower-filled rides.

Forestry England Ecology and Heritage Manager for the Central England District, Adrienne Bennett, said: We are thrilled that the hard work by Forestry England staff over many years has created the ideal habitat for the reintroduction of the Chequered skipper on our site. We hope the butterfly thrives and the population is able to spread from here.”

Last month Butterfly Conservation ecologists travelled to Belgium to collect Chequered Skipper adults from the Fagne-Famenne region in the south of the country, where they are widespread, with the help of Belgian experts from the Research Institute for Nature and Forest and the Department for the Study of the Natural and Agricultural Environment.

Adults were chosen from Belgium rather than the only other UK population in Scotland as the Belgian Chequered Skippers are found in a similar landscape to Rockingham Forest and share the same caterpillar food-plant, False Brome that the English colonies used prior to their extinction.

The reintroduction forms part of the Roots of Rockingham project which is working across a network of sites to restore the forest to its former glory helping many woodland species including the Willow Tit, Lesser Spotted Woodpecker and Barbastelle Bat. 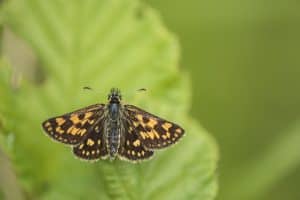 It is hoped that once the butterfly population is secure, the public will be able to visit and enjoy seeing Chequered Skippers fly in England again.

Back from the Brink Communications Manager James Harding-Morris said: “Whilst these are only the first steps towards re-establishing the Chequered Skipper in England, it still feels like a wrong has been righted. We are delighted that through Back from the Brink so many species are being given this ‘second chance’ to survive – and hopefully thrive – alongside humanity.”