Seeing Chequered Skippers flying once again in their former English strongholds has been a dream of mine since I was a child. I grew up in Northamptonshire in a house that backed on to fields and while exploring the seemingly endless natural world beyond the back gate I developed a fascination for butterflies. I kept this interest in butterflies into my adult life and I now find myself as the Northamptonshire County Butterfly Recorder. It was during my early studies of butterflies that I first came across the Chequered Skipper, but only in a book as the species became extinct in England two years before I was born. I was saddened to read the accounts of its disappearance from its former strongholds here and I was amazed to learn how rapidly a species can decline and disappear in a short space of time.

So I was very excited when I heard about  an amazing new project called Back from the Brink that was being set up to bring conservation partners together to help our wildlife, and that one of these partners, Butterfly Conservation, was  leading work in the Rockingham Forest landscape which included the ambition to reintroduce the Chequered Skipper back into England! I put my name down as a volunteer as soon as I could, keen to play a part in this project. In 2018 I helped with monitoring after the initial release, and it was great to see the Belgian Chequered Skippers on the wing, getting used to their new home. At the time, myself and a few other volunteers all agreed how exciting it would be should some Chequered Skippers survive and emerge the following year.  Now that would be amazing!

Throughout the rest of the year I’d talk to other volunteers and I admit a bit of worry crept in.  Although the long hot summer of 2018 led to one of the best butterfly seasons for many species we’ve ever had in Northamptonshire, would the Chequered Skipper larvae be able to survive the drying up of so many foodplants?  In Spring 2019 the news eventually broke that Chequered Skippers had begun to emerge in Europe and then in Scotland. By now the monitoring in Rockingham Forest had already begun and although everyone was drawing a blank, I was itching to get in there to take a look.  But work and local Butterfly Conservation branch commitments meant I couldn’t start my first monitoring session until mid-May.

On the morning of this session, I woke to find the sun shining so headed to the site a little earlier than planned as I really wanted to make the most of my day. The monitoring method is quite simple – walking as many rides as possible to record the location, sex and behaviour of any Chequered Skippers.  As none had been seen yet I had already worked out a route that paid particular attention to areas where I’d seen released Belgian ones the year before. 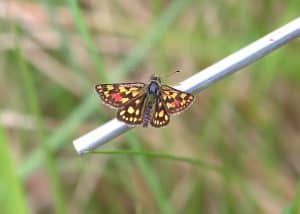 It’s a puzzle even to me as to why I didn’t go up the first ride on my planned route but I’m very pleased I didn’t!  For some reason it just didn’t seem right. I’m not sure whether it was the position of the sun or wind direction that put me off, but whatever it was I decided to walk a bit further and head down a different ride instead. After filling in my recording form I set off on my walk, paying particular attention to the Bugle flowers.  Quite a few bees caught my eye as they darted around, then all of a sudden a butterfly took off from the grass and settled, showing itself to be a Small Heath.  This was a good sign as it meant that butterflies were already on the wing that morning. I continued my walk and after only a few paces I noticed another small patch of Bugle on my left and froze, my jaw slowly dropping open as goosepimples appeared on both arms. Right in front of me busily nectaring on a Bugle flower was a Chequered Skipper - the first one to be seen in England for over 40 years! 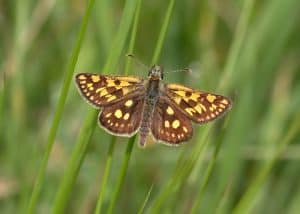 I slowly put down my rucksack and took out my camera to take a few photos before ringing Project Officer Susannah O’Riordan to give her this incredibly exciting news. By now the Skipper had moved from the Bugle to bask in the grass – allowing for a few more photo opportunities before I continued my survey.  Another volunteer arrived later that morning and between us we managed to find two more Chequered Skippers in different locations.  Although it was early days in the emergence of these English Chequered Skippers, the signs were really encouraging! 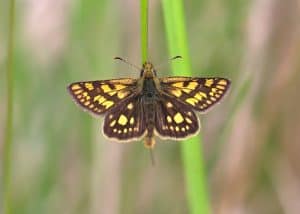 I had to wait a week before being able to monitor again but luckily this coincided with the release of the second batch of Belgian Chequered Skippers.  After helping set up the release pens and seeing the butterflies being put inside them to get used to their new home,  I started my monitoring survey – just as the sun broke through the clouds. Unfortunately the sun was short lived as the heavens opened 10 minutes later and the rain started to pour. I half heartedly walked a few rides on my monitoring route, when not sheltering under the trees, before looping back to the release site. As I headed back up the ride towards the rest of the group, who were gathered around one of the pens ready to release the butterflies, the rain stopped and it started to warm up. 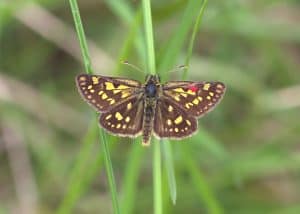 Approaching the group I suddenly noticed a butterfly out of the corner of my eye and to my amazement it was a Chequered Skipper! I called everyone over and it was fantastic to see everyone’s excitement as they gathered round to admire this special butterfly. A few years ago I visited a very good friend of mine in Fort William who took me to see Chequered Skippers around the Highlands and it amazed me then how quickly they can come out after a rain shower. These new English ones seem to show the same characteristics as, after I watched the Belgian Chequered Skippers be released, I continued my survey and found a few more fresh English Chequered Skippers basking on the tops of wet grass stems in between rain showers. When it comes to wet weather they certainly seem to be a very plucky butterflies! 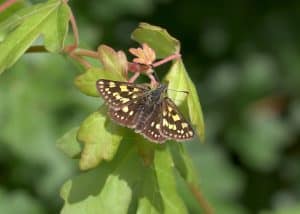 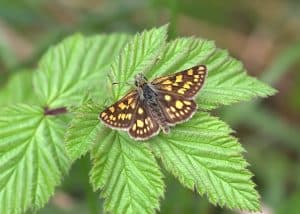 The Back from the Brink project and Butterfly Conservation deserve congratulations for their amazing accomplishment this year. I feel extremely privileged to have been given the chance to help this project in my own small way and I would urge anyone who is reading this to offer some free time to volunteer for other Back from the Brink projects you may have in your area.