Trying to conserve a species of grass doesn’t seem like a job at the most glamorous end of conservation. Interrupted brome (Bromus interruptus - not the most inventive of names) is an unassuming plant – not especially tall, it is a pleasant, mid-green colour and somewhat hairy. Its flowers are the same: green and a bit hairy. No showy flowers, no majestic stems – just a grass and a bit like quite a few other grasses.

Until you realise that it’s not just a rare wild plant, but that it very nearly disappeared as a species. And not just from this country, but from the whole world. Something unique was nearly lost forever but for the efforts of a handful of plant conservationists who managed to haul the plant back from the brink at the point where it was about to tumble into the abyss. Suddenly, joining the rescue team for this unassuming grass starts to feel very exciting and glamorous indeed.

Interrupted brome is endemic to England – that is, it is native here, but nowhere else in the world, and actually, apart from a couple of 1930s records of introduced plants in the Netherlands, has never been found outside England. It wasn’t even noticed by botanists until the 1840s, and not described as a separate species until the 1890s. Over the following decades, it was found in more than 100 places across southern England, often associated with fields of sainfoin, which was widely grown as fodder for livestock.

Then it declined rapidly, so that by the 1970s, just one site remained, and, in 1972, it disappeared from that last remaining site. Where did it come from and why did it disappear? Well, it seems that it may have evolved relatively recently (the closely related soft brome may be its most likely antecedent), and then found a perfect home in the agricultural practices of the 19th Century. It clearly benefited from the methods used to cultivate sainfoin, and its seeds may well have been accidentally gathered alongside seeds of sainfoin and then sown as the new crops were sown. It disappeared because sainfoin fell out of fashion as a fodder crop, and because agricultural practices improved – seed was better cleaned and weeds less tolerated amongst crops.

What saved this plant was one person, a university lecturer, who had collected some seed from the last remaining population, and had been growing plants for his own studies – this last remaining, ‘captive’ population has been the basis of all subsequent conservation attempts. And for the past few years, Plantlife’s Ranscombe Farm Reserve has been one of the very few sites where work is progressing to try and re-establish self-sustaining, wild populations of interrupted brome. 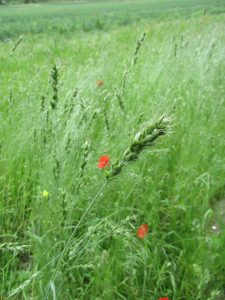 This is trickier than it might at first seem. Interrupted brome is an annual, and a plant of sown crops. It can germinate in autumn and spring, and plants produce plenty of seed (if they are not grazed off by rabbits!) but unlike many annuals of arable farmland, its seeds don’t seem to persist for very long in the soil. And it seems unwilling to move very much from where it started – in four years at Ranscombe, the original sown populations have spread just a few yards from where they started. Nonetheless, we managed to get small, localised populations to persist and, in one case, even increase over a four-year period simply by gently cultivating the soil each autumn. It’s a start, and perhaps the secret to getting the plant to start moving around the fields at Ranscombe is simply to have a much bigger population to start with – more plants producing more seeds means much better odds that a few seeds will move greater distances. To which end, I’ve already gathered a proportion of this year’s crop of seeds, and my next job is to carefully pick apart each seed-head and separate out a few thousand seeds for sowing this autumn. Now what was it I was saying about glamour?