Not only have we lost the flowers …

My mother who was born in 1924 was keen on wildflowers and had a wildflower book (a school prize for her ‘fieldwork’) in which she ticked off all the wildlflowers she had seen. Under her guidance I too became interested in wild plants from an early age, and I was always intrigued by the plants that she recorded which I, who started seriously noting things in the late 1950s, have never or rarely seen, in a genuinely wild state: Corncockle, Cornflower, Corn Marigold, and Shepherd’s-needle.

My interest in plants has remained with me throughout my life – you’re never lonely if you have this interest; everywhere there are old friends to see, and new friends to discover.  And on the whole I prefer the old, it’s good and reassuring, to see primroses thriving on a bank where they used to grow half a century ago.

In recent years my interest has focused on the folklore and uses of plants, and in my recently published book, Vickery’s Folk Flora, I attempted to provide an introduction to the folklore of British and Irish plants.  I don’t take the view that plant-lore is necessarily diminishing; it’s changing, but it’s still there waiting to be collected and studied.  However, although new local names for plants are  being created, obviously many of the names used for once common arable weeds have, like the weeds themselves, been precariously preserved.  Even if we’re lucky enough to find Shepherd’s-needle or Corn Buttercup, we probably only know their standard English names.

But until about a century ago things were very different, plants such as Cornflower and Scarlet Pimpernel had scores of names.

Shepherd’s-needle acquired almost 50 names, ranging alphabetically from Adam’s Needle, recorded from  Berwickshire, Northumberland and Somerset, to Witch’s Needles also in Berwickshire.  Most of these names refer to the needle-like seed-pod, and presumably none of them remain in current use.

Common Poppy acquired over 70 names, and some of these are interesting in that they reveal something about the plant’s place in popular culture.  Some, for example, suggested that poppies were somehow dangerous: blind-eyes in Buckinghamshire, earaches in Derbyshire and Nottinghamshire, headache in Northamptonshire, and lightnings and thunder-flower in Northumberland.  Probably such names and related beliefs, such as  ‘children were afraid to pluck the flower, for if ... the petals fell off in the act, the gatherer became more liable to be struck with lightning', were propagated to discourage children from venturing into cornfields and damaging the crop.  However, there does seem to be some evidence that long exposure to vivid reds could damage vision; military tailors who sewed scarlet tunics were particularly vulnerable to premature declining eyesight. 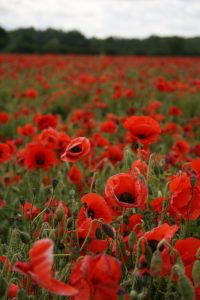 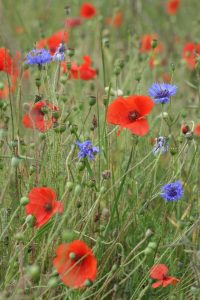 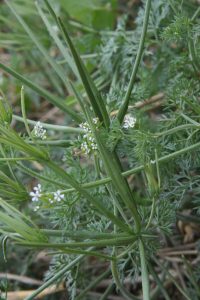 Other names for poppies were simply descriptive such as some of those recorded from Somerset:  Old Lady’s Petticoat, Red Huntsman, and Red Soldiers, all referring to the scarlet petals, and pepper-boxes, which refers to the seed-capsules.

Corn Marigold had almost 80 names, though some of these can be considered as variants, or alternative spellings, of the same name.  Thus Goold, Gool, Goles and Guile were all recorded in Scotland, and all are probably a corruption of ‘gold’.  In Gilmorton, Leicestershire, where the plant was known as Geld, it was ‘formerly such a pest that a fee of 3d was awarded by the farmers for its eradication’.  In Scotland ‘Gool-riding … was the custom of riding through the parish to observe the growth of this plant and to fine the negligent farmer’.  Also in Scotland it was said that ‘ the Gule [Corn Marigold], the Gordon and the Hoodie Craw are the three worst things that Moray ever saw’. An interesting name recorded from Co. Carlow was Mogue Tobin, said to commemorate a farmer who became bankrupt as he was unable to grow anything else on his land.  Our ancestors would have found the deliberate cultivation and encouragement of Corn Marigold difficult to understand.

Recently there has been some controversy about various ‘nature’ words being omitted from children’s dictionaries, but this is just the tip of a much larger ice-berg; as species become rare, and as many people become intimately reactive with the natural world we lose a plethora of names and lore, life becomes less poetic and more focused on the material.

He worked in the Botany Department of the Natural History Museum from 1965 to 2007 remains a scientific associate at the Museum.  His current research focusses on the folklore and uses of British and Irish plants -  www.plant-lore.com.