One of the things I enjoy most about our Back from the Brink project is its variety. Not just the variety of species that we are working to protect, but also the variety of activities that we get to do in order to achieve these aims. After another busy year it seems like a good time to reflect on some of the highlights over the past 12 months.

Back in the autumn/winter of 2018 our volunteer Rugged Oil Beetle surveyors discovered a number of new sites for the beetle here in Gloucestershire. Bull’s Cross, Snow’s Farm and Rodborough Common were completely new to the list, while Painswick Beacon was confirmed to have a very large population following the sighting of one individual earlier in the year. By far the most incredible result however was at Juniper Hill, another new site for the beetle, where a staggering total of 90 beetles were counted in one night! All fantastic results which show just how important the Gloucestershire Cotswolds are for this rare beetle. 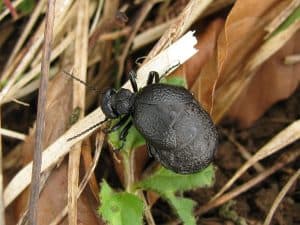 This year we also got some good news for our other target beetle species, the Rock-rose Pot Beetle. Only known from two sites in the Cotswolds, (and only four sites nationally), this has been our most elusive species to find. Having failed to find any last year and still not locating any on our training workshop this year, (despite having 12 people out combing Stinchcombe Hill), it was starting to look fairly bleak. Luckily however, our colleague from Buglife returned to carry out further surveys and was rewarded with finally finding one beetle at Stinchcombe Hill and another three at neighbouring Breakheart Hill. Brilliant news and a huge relief to know that this extremely rare beetle is still present in the county. 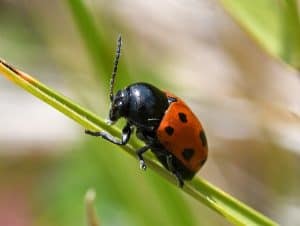 This summer we also embarked on a new type of survey for Greater and Lesser Horseshoe Bats with help from our colleagues at Bat Conservation Trust. Using a newly developed sound recording device called an Audiomoth, we are aiming to understand more about how these bats use Rodborough Common and how they respond to changes in grazing. Both bat species rely heavily on insects that feed on animal dung, such as dung beetles and dung flies and therefore need a continuity of grazing animals near to their roost sites. The new paddock grazing at Rodborough Common that has been set up by our project with the support of the National Trust and the three remaining commoners, not only benefits the grassland itself and species such as the Duke of Burgundy butterfly, but should also provide more feeding opportunities for the horseshoe bats that make their way over to the common from Woodchester Park.

In addition to surveys we’ve also been able to run some new events this year. One of these was a ‘Wild Writing’ workshop which aimed to engage local people with the wildlife of our limestone grasslands through writing. Led by a poet, we discussed what nature meant to each of us, looked at some of our favourite pieces of nature writing and then, following a walk around Rough Bank (in the rain!) started writing our own pieces of poetry or prose. This was truly an eye-opening experience for me as having never written any poetry, it suddenly became very easy among such an open and engaging group. It turned out to be a lovely way to view and experience nature in a different way and something I am hoping to repeat next year.

We have also been lucky enough to work with Kew Garden’s Millennium Seed Bank (MSB) this year. As part of Back from the Brink, the MSB are providing training workshops in how to make seed collections and are helping various BftB projects collect seed from remaining rare plant populations. Back in June we spent a day with staff from the MSB assessing and collecting seed from Pasqueflowers at Barnsley Warren, a site known for its fantastic population of this rare plant. We managed to collect over 6000 seeds, now safely stored back at the MSB, which we can access in future should we decide to carry out any reintroductions. 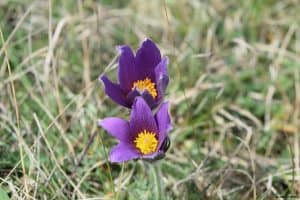 Alongside all this, plans for a Marsh Fritillary translocation have continued, with further surveys taking place to determine the best recipient site. Following various habitat assessments, temperature data loggers put out at several sites in February found Rough Bank to be the closest match to Strawberry Banks, the last remaining breeding site for the butterfly in Gloucestershire. As February is the month when the overwintering larvae come out of hibernation, it is vital that the chosen site gets enough warmth to enable the larvae to become active. 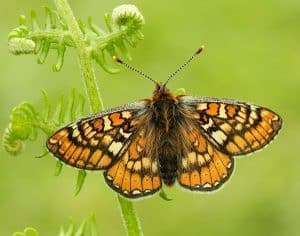 It is now hoped that a translocation will go ahead early next year to Rough Bank, however as the population at Strawberry Banks is too low for larvae to be moved from here, the plan will be to bring in larvae from sites in Wiltshire. Recent counts recorded over 500 larval webs at the Wiltshire sites in comparison to just 15 at Strawberry Banks. Final agreements and plans are still being made so watch this space for further updates!

Back from the Brink Cotswolds Community Engagement Officer