Arable plants: weeds, or the key to the survival of our farmland wildlife?

Arable land cultivated for crops like cereals, potatoes, broccoli or daffodils is part of the farming landscape, but what does the term arable conjure up for you? Whether you picture a romantic vision of scarlet Poppies and bright blue Cornflowers dotted about a golden field of corn, or a sterile mono-culture with little beneath, it may surprise you to learn that it is arable land that supports the fastest declining group of plants in the UK! More threatened even than the wildflowers growing in our hay meadows or wetlands, arable plants, often referred to as arable ‘weeds’ are vital for the survival of farmland wildlife.

Traditionally arable fields supported a wide range of these ‘weeds’ such as Fluellen, Corn Marigold and Mayweed, which cannot survive without the regular disturbance of cultivation. However, these fascinating and often overlooked plants are now threatened by the arable farming on which they depend for survival. Sadly these days, arable fields are much less diverse; the increased efficiency of modern day farming using more herbicides and fertilisers, seed cleaning and more competitive crop varieties, all contribute to the decline of arable plants, reducing their chances of taking hold and surviving in arable fields. Changes in farming practises have an effect too, such as the move from arable to grassland farming and changing from spring to winter sown crops, meaning arable plants germinating in spring do not have the opportunity to become established in the first place.

These plants are at the bottom of the arable farmland food chain, and their decline has serious knock on effects for other wildlife.  Arable plants are an important food source for insects, which in turn provide food for the chicks of many farmland birds in spring. Research shows that the abundance of insects eaten by farmland birds is depended on the cover and range of arable ‘weeds’ present. The seeds produced by these plants are also vital for the winter survival of seed eating-birds like Linnet and Yellow Hammer; and it is no coincidence that numbers of farmland birds, many of which are small, seed-eating species, have also declined significantly in recent decades.

Another group of arable plants you may see on a farmland walk are the Fumitories. The name comes from the French ‘fume terre’ meaning ‘smoke of the earth’, because of their greyish leaves and wispy appearance. Fumitories have unusually shaped flowers varying in colour from white to a range of pale pinks and purples. Although many arable plants are small and inconspicuous, some species are downright flamboyant, like purple Viper’s Bugloss with its vibrant purple-blue flowers out of which poke bright fuchsia-pink stamens that look like little snake tongues, giving this plant its unusual name. 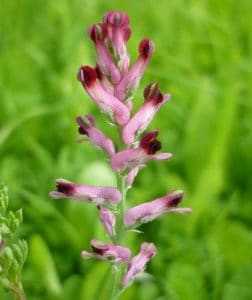 As with all wildlife, records are vital to building a picture of the distribution of arable weeds which helps inform our conservation work, so do send us your records using the Online Recording Kernow and Isles of Scilly Website

From Fumitories to Weasel-snout (or weasels for that matter), we want to hear about what you see on your farmland walks!