Again I am long overdue an update, but it has been quite a busy summer season on the project.  As we’re now over halfway through I thought I’d tell you where we’ve got to!   So far we have found homes for 1700 plants on over 60 sites.  In Dorset where there is only one colony we are bolstering the supply of plants on the actual site which still supports the moth, and have planted more than 500 plants in the wider landscape.  In North Wiltshire and Gloucestershire, we are linking the colonies by planting stepping stones of habitat between them, with the aim that the species will become less genetically isolated.

So it sounds really good that we’ve planted 1700 and the target for the project is 3000.  Not all of our plants have survived though.  In the first summer after planting we had the drought to contend with for one thing, so we lost some plants in that.  Also Barberry is a slow-growing species that is easily out-competed by more vigorous species such as Clematis, Brambles and Bracken.  Aftercare of our plants is incredibly important and I’m trying to find planting locations where this is possible.  We have moved from the idea of planting mainly in hedgerows to finding people with land, young woodlands and large gardens where possible.  This means that the opportunities for aftercare are greater too.  In part to make up for plants that were lost in the drought, I’ve been collecting Barberry berries and encouraging people to grow more plants from the seeds, so we hope that we will have planted enough of these extras by the end of the project to make up for casualties lost in the drought.

The Barberry Carpet has two broods per year and therefore I ran three moth trapping events in the colony areas this summer to see if we could attract any adult moths.  This doesn’t often happen as our preferred method of surveying is to look for larvae as it’s much more reliable.  I was so pleased though that on two of the three occasions we were successful!  Not many people have seen the adult moth as it is so rare, so it had been excellent to run events where they have turned up at the trap.  Some real expert ‘moth-ers’ have attended as well as locals and recently we even had 9 moth traps going at a single site.  I wasn’t confident that we’d attract any Barberry Carpet, but was very relieved to get 2, especially as the weather turned bad and we had our traps under big fishing umbrellas.  The moths were obviously released unharmed the next day after posing for some photos of course.  We were also lucky enough to get 17 of them at an event in May this year which caused great excitement amongst attendees!   It is always such a relief when you get a good catch, especially when people have driven a long way with high expectations!

Our larval surveys took place through early and mid-September, and we had mixed results.  On some sites we had fewer larvae than normal and yet a larva turned up on a new site that has been surveyed for 10 years with no previous success!

We are just entering the time when I can get planting with volunteers.  I have a lot of sites lined up for this winter but am hoping to be able to plant about 1000 plants, so expect to be extremely busy.  Our events are starting in mid­-October and will be advertised on here. 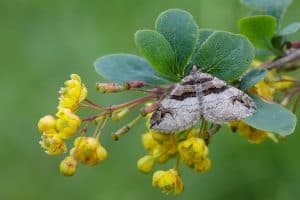 If you would like to get involved with this project, you could always volunteer to help if you live in North Dorset, North Wiltshire or Gloucestershire?  We’re always after more planting locations too, so if you live in these areas please get in touch.  If you live too far away to attract the moth to your garden with our plants, I may be able to send you some seeds so you can grow your own plants.  I’m really hopeful that a few years down the line we will start to find Barberry Carpet larvae at our new planting sites so watch this space!