Over the last couple of years, I have been  involved with the volunteer monitoring of the Chequered Skipper release in Rockingham Forest, firstly with the adult butterflies brought in from Belgium , and then with the butterflies that had emerged from those first adults. 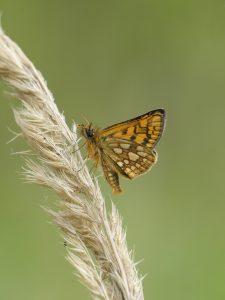 Later in the first year we had looked for signs of the early stages of this butterfly (the caterpillars) without any success. We did however find quite a few Large Skipper larva which have a near identical life cycle to that of the Chequered Skipper. We had got very excited a few times when finding the grass tubes that both these larva spend this stage of their life cycle in, but it always ended in disappointment as they all turned out to be Large Skippers! 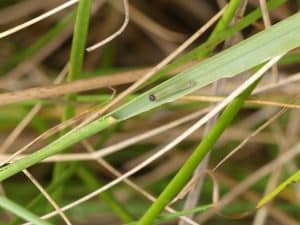 This year after monitoring  the adult butterflies, I had noted where I‘d seen female Chequered Skippers in their flight season and thought I might concentrate my search for caterpillars in those areas later in the year.

A few weeks later I went back to one of those areas and started to search for feeding damage on the grasses and also look for the grass tubes. Almost immediately I came across a tube and after a gentle tap on the tube a small green-headed caterpillar emerged from it! This was really exciting as it also had stripes running down the body, unlike the Large Skipper caterpillar, and from studying pictures previously at home, I knew then that this was the caterpillar I had been looking for. The first Chequered Skipper caterpillar found in England in almost half a century!

A few pictures were taken and the caterpillar returned to the safety of the tube. The coordinates, position in the ride, height of the tube and grass type were noted among other things and these details passed on to the monitoring team, who will use this information to start to build up a picture of the early stages of its life-cycle and importantly how to manage the habitat to secure the future of this beautiful little butterfly. 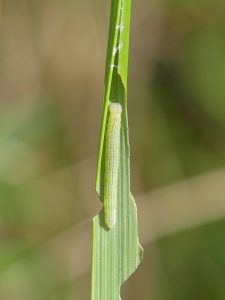