Burnham Beeches had been pretty much written off as unimportant for lichens as it was assumed pollution from London would have led to the demise of interesting species.  One particularly important species – the Pox lichen (Pyrenula nitida) – was known to survive, but only on one dead Beech tree. 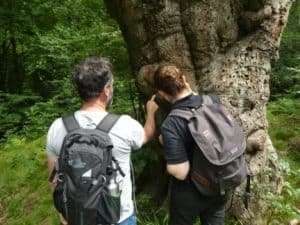 To aid the survival of this species, in April 2019 fragments of this lichen were transplanted onto new trees by gluing them in place with Araldite. Then some reconnaissance surveys with Neil Sanderson made some really significant discoveries, demonstrating that Burnham Beeches is one of the most important surviving remnants of Beech woodland in Great Britain.

A number of very rare and significant lichen species were discovered.  Firstly, the Pox lichen (Pyrenula nitida), was found growing on several new trees, including young Beech trees. We were delighted to discover a much healthier population than previously known, Burnham Beeches being one of twelve sites in Great Britain. We also recorded  Pyrenula nitidella  only recently refound, making Burnham Beeches  the second known location, the Dimple lichen (Coenogonium taversianum) the 7th record for Great Britain, the Circumspect dot lichen (Bacidia circumspecta) which was the first record for central and eastern England and finally, a good population of the Sap-groove lichen (Bacidia incompta). These results were summed up by Neil Sanderson – ‘This exceeded expectations and indicates that there is a major survival of a significant relic oceanic Beech lichen assemblage at Burnham Beeches.’ 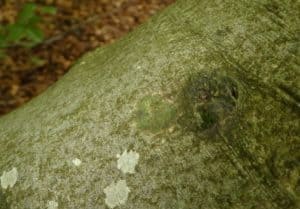 Burnham Beeches in an important old growth pasture woodland, with associated heathland, designated a Site of Special Scientific Interest and Special Area of Conservation.  The pasture woodland is noted for frequent ancient Beech pollards.  The common appears to have been heavily grazing into the early 20th century, with limited regeneration occurring.  In the latter part of the 20th century the grazing ceased and there was a great deal of infill of the previously open pasture woodland and loss of open heathland has occurred.  Beech and Hornbeam old growth woodlands have distinctive lichen assemblages, which in Britain survive best in the New Forest.  The New Forest supports a mixture of continental Beech specialist lichens and southern oceanic species, which is distinctive in a European context.  Due to past acidifying pollution there are few other examples of this rare assemblage surviving in Britain.  Only Ebernoe Common, West Sussex (a Beech site) and Hatch Park, Kent (a Hornbeam site) are reasonably intact.  At Burnham Beeches the impact of past acidifying pollution was high but relics of this Beech – Hornbeam assemblage survived.  In particular, the Pox lichen (Pyrenula nitida) was known to survive on two Beech trees, but one of these had died some time ago and the other was now dying.  Some translocations had been made from the first dead tree in 2001.  Otherwise extant populations are only recorded from 11 New Forest woods, where it ranges from rare to frequent.

Until a scoping visit in September 2018 the Pox lichen (Pyrenula nitida) was known to survive (naturally occurring) from only one tree at Burnham Beeches, an ancient Beech pollard to the northeast of Mendelssohns Slope above Burnham Walk. This tree has been dead for some time and the likelihood of the tree falling is increasing. The bark is also starting to separate and fall from the lignum.  It was for these reasons that a translocation project was planned, using material from this pollard and transplanting onto suitable trees elsewhere on the site.

During that initial scoping visit additional specimens of Pox lichen (Pyrenula nitida) were found on Beech pollards in an apparently unexplored part of the site that harboured rich lichen interest on ancient Beech pollards including some very rare and specialist species (Sanderson 2018). These were in a healthy condition and some were colonising juvenile thalli. Furthermore, during the course of the translocation work on 2-3 April 2019 more Pox lichen (Pyrenula nitida) was found, along with colonising Pyrenula thalli that are likely to be Pox lichen (P. nitida), encouragingly on relatively young Beech trees. Other very significant finds were also made on a wider reconnaissance (Sanderson 2019, Lamacraft 2019).

The Section 41 and red-listed (Vulnerable) Sap-groove lichen (Bacidia incompta) was also found on the original Pox lichen (Pyrenula nitida) pollard in 2018, previously overlooked.  The opportunity was therefore taken to remove and transplant some of this material. Some Thelopsis rubella, a rare species in Buckinghamshire and generally in south east England, was also removed and transplanted. 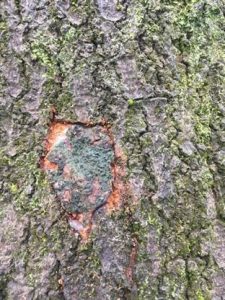