The Healing Power of the Poppy

Two of the c. 70 species of the poppy within the genus Papaver have been responsible for two very influential but different tasks during the past century; Papaver rhoeas and Papaversomniferum (Opium Poppy). They have a rich history of medical, scientific and economic importance.

The flowers of the field poppy have long been used as a pain killing drug for soothing mild aches and a mild sedative/relaxant, an expectorant for treating catarrh and coughs, as a digestive, and even for reducing the appearance of wrinkles and in lipstick! More recently, chemical extracts from the petals of P. rhoeas have recently been tested for potential in the prevention of skin cancer (Ennamany et al., 2013).

The white latex of the opium poppy contains far greater quantities of potent narcotics than that of the field poppy, which has led to its importance in medicine but also to its exploitation through illicit trade. From 1914, morphine ampules were needed in huge quantities to aid millions of soldiers injured in the bloody battles of the First World War. This sudden and important demand temporarily halted advances made in preceding years concerning the regulation of opiates. The poppy also has symbolic ties to Remembrance Day from the First World War. The poppy’s origins as a symbol of remembrance lie in the First World War poem “In Flanders Fields by Canadian officer John McCrae, first published in December 1915.

The Spring of 1915 was the first time that warm weather began to warm up the countryside after the cold winter at war in 1914-1915. In the region around Ypres in Belgian Flanders the months of April and May 1915 were unusually warm. Farmers were ploughing their fields close up to the front lines and new life was starting to grow. One of the plants that began to grow in clusters on and around the battle zones was the red field or corn poppy (its species name is Papaver rhoeas). It is often to be found in or on the edges of fields where grain is grown.

The field poppy is an annual plant which flowers each year between about May and August. Its seeds are disseminated on the wind and can lie dormant in the ground for a long time. If the ground is disturbed from the early spring the seeds will germinate and the poppy flowers will grow.

This is what happened in parts of the front lines in Belgium and France. Once the ground was disturbed by the fighting, the poppy seeds lying in the ground began to germinate and grow during the warm weather in the spring and summer months of 1915, 1916, 1917 and 1918.

The symbol of the poppy helps people remember those lost in the war and honour their sacrifice for us. 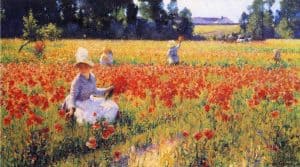 This 1890 painting by Robert Vonnoh (1858–1933), called “In Flanders Field,” depicts how beautiful red field poppies appeared in the late 19th-century. Today the original work is part of the permanent collection at The Butler Institute of American Art.

Colour in the Margins Outreach Officer