The striking Purbeck Mason Wasp (Pseudepipona herrichii) is one of Back from the Brink’s primary species. Found on only a few sites in Purbeck, Dorset, it is classified as endangered and is one of the rarest invertebrates in the UK.

Very much a heathland species, the Purbeck Mason Wasp has complex and specific habitat requirements. Exposed, sandy ground with some clay content is required for suitable nesting sites; they also need access to open water to assist in their nest building.

These amazing wasps have additional challenges to contend with to ensure their survival, including having to find a very specialised food source for their young; the larvae of a very small moth, the Heath Button Moth (Acleris hyemana).

The heathland also needs to be rich in early- to mid-succession Bell Heather (Erica cinerea), both to provide a nectar resource for the adults and as the food plant of Heath Button Moth caterpillars. 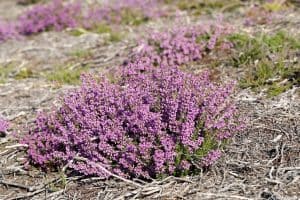 This series of photos illustrate some interesting and rarely observed behaviours of the wasp. 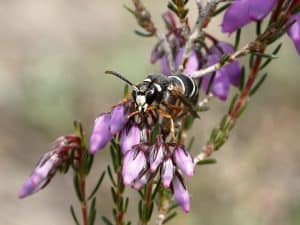 The males emerge from their winter diapause, followed a few days later by the females.

Mating occurs on, or near, the nest sites, and once mated, the females begin excavating a shallow nest burrow. The males die after about 10 days leaving all the work of excavating the burrow to the females. 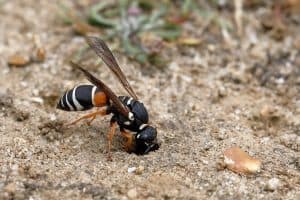 She will carry the spoil a little way from the burrow. 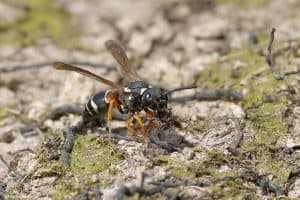 Then leave it in a an easily distinguishable granular spoil heap. 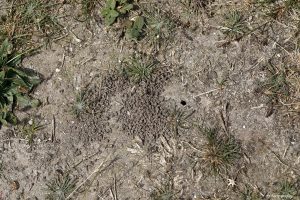 There are occasions when rival females will try to occupy her burrow, which she will defend and if required she will evict the imposter. 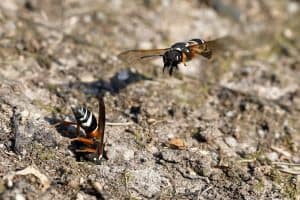 Once the burrow is complete she will then leave it uncovered and fly off in search of the Heath Button Moth larvae; these are found in webs woven on the tips of heather. 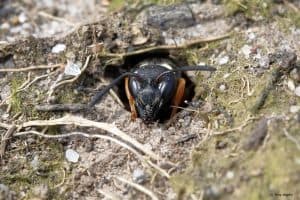 The female wasp will paralyse the larvae by stinging them and will then bring them back to the burrow alive. Usually the wasp will grasp the larva just behind the head and fly in perfectly balanced. 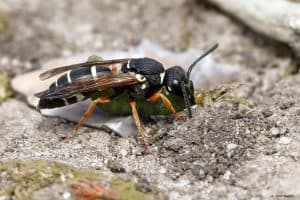 In this photo she has got it slightly wrong and had an awkward landing! 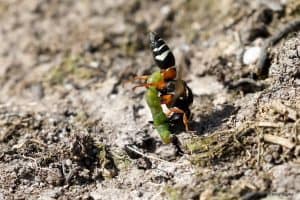 Starting at the bottom of the burrow, she stocks the cell with between 12 and 20 larvae before laying her egg, then sealing the brood cell and creating the next cell. Each burrow can have 1-3 brood chambers within it.

Unlike some other wasps ie. the Bee Wolf (Philanthus Triangulum) who can fly straight into the burrow with the prey, she will land close by and then proceed to carry the larva and push it into the burrow. 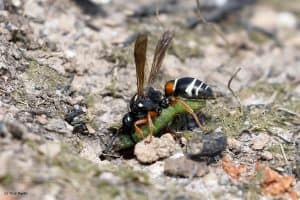 However, it could be argued that the Purbeck Mason Wasp makes one vital mistake; by not covering the entrance to the burrow - Black Ants (Formica fusca) will search out and steal the larva and take them back to their own nest. 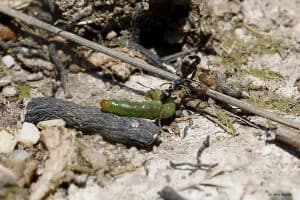 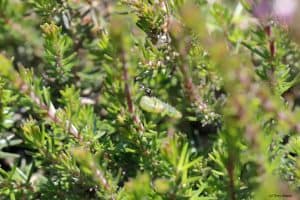 Finally, when the Purbeck Mason Wasp has completed the nest burrow she will seal it with a plug of moistened clay so that it is perfectly camouflaged.

3 thoughts on “The Purbeck Mason Wasp”