Scarlet Pimpernel has always been my favourite flower. Long before I developed a professional interest in scarce and declining arable plants (formerly known as weeds), I just adored the scarlet pop of colour that scrambled across the field edges and gateways where I grew up.  It seemed to be everywhere.

It still one of the more frequently encountered arable annual plants. Whilst many of its field mates have suffered severe and occasionally catastrophic declines the scarlet pimpernel is still comparatively common. 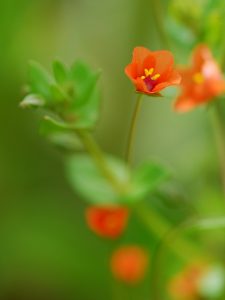 Through necessity, conservation has tended to focus on the most threatened species. However, we should not forget that the rarest plants are often found amongst more common ones. All too often these common plants such are overlooked or at best regarded with ambiguity but recently my work with arable plants and wider farm wildlife has encouraged me to review the importance of these more common communities.

Margin areas which are cultivated in the autumn will often flower well ahead of those which are done in the spring. Margins designed for scarce autumn germinating species such as the critically endangered Shepherd’s-needle will potentially be awash with early flowering species such as Red Dead-nettle and Speedwells in the spring. Brilliant news if you happen to be Queen Bumblebee coming out of hibernation or indeed an early Turtle Dove looking for seed after a long migration. Similarly, the spring germinating margins often hold a higher proportion of bare ground. These patches are great for basking insects and foraging Grey Partridge chicks.

Red Dead-nettle is a good example of how a diverse community of more common species may benefit scarcer plant populations. Red Hemp-nettle is the scarce cousin of this early flowering species. Unsurprisingly the flowers of both are similar. The rich pinkish petals and long flower tubes seem to favour the tongues of common Carder Bees. Researchers have suggested that an abundance of Red Dead-nettle in reasonable proximity may well be important to maintaining enough pollinators for the much scarcer Red Hemp-nettle.

When looking back across my survey notes I realised that a great many of the scarcest arable flowers share their habitats with a common cousin. Fool’s Parsley is the more prolific relative of Shepherd’s- needle and Corn Parsley. Mayweeds are the relations of (and often visibly indistinguishable from) the scarcer Corn and Stinking Chamomiles. Even the highly range restricted Fingered and Spring Speedwell share their isolated Breckland homes with Common Field Speedwell and Wall Speedwell. More research is needed but it is reasonable to assume that if all of these families share pollinators then good numbers of common plants are crucial to ensuring good numbers of pollinators for the scarce plants too. 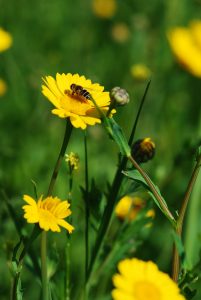 Without suitable numbers of pollinators a critical element of the scarce plants lifecycle is lost and they will continue to decline. Therefore, in addition to targeting the conservation of our rarest arable plant sites we need to value the diverse yet common assemblages of arable plants found across the wider landscape. Common arable plants such as Poppies, Speedwells, Dead-nettles and Mayweeds provide a wide range of other farm wildlife such as Grey Partridges, Turtle Doves and Finches with forage and shelter, as well as assisting the survival of their rarest cousins.