I saw my first sand lizard in the 1960s at Ainsdale, when I was aged about ten. The car would be parked on the beach, and we would climb over the frontal dunes to the dune slack area, looking for whatever creatures were in the water. That is where I saw my first newt and later the brightly coloured green lizards darting in between short prickly bushes. 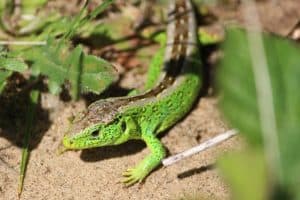 After my first encounter with both species, I joined the library to find out more about these creatures and tried to identify them by checking the painted coloured plates in the books. I eventually read every British herpetile book in the library. I have copies of most of the books today, probably costing me more than their original retail price.

As a child, I had adventures with other animals as well, particularly, voles, shrews and field mice. I ended up on antibiotics after my eyes became swollen and closed up after handling hairy caterpillars and I got stung after going into a shop to buy sweets and forgetting a big bumble bee was in my pocket.

If I go on holiday around the world I find out what species of fauna live in the countries and try and photograph them. Sometimes I look at a habitat and just know that reptiles will be there. I think that good herpetile surveyors are born not made, and most of them will have similar stories. You have to be enthusiastic to start surveying a site three weeks before you expect a lizard to emerge. Just so that you can record the first lizard of the year. You have to be persistent to spend hours on a site only to get negative records but you are soon looking forward to the next visit. The sun comes out, conditions feel right, you stop what you are doing and off you go with the camera.

I live in Ainsdale, but life and work can get in the way. Apart from mountain biking through the National Nature Reserve, we didn't go to the beach much even after I had retired. I did occasionally see sand lizards basking on tarmac to catch the last heat of the day. That was right in the middle of Ainsdale, when I was going to work on nights.

In 2018, I thought I would head down to the same beach area I used to visit as a child to photograph butterflies. I put some photos onto a 'Green Sefton' website and read that John Dempsey was leading guided walks to see Natterjack toads. These are known locally as the ‘Birkdale Nightingales’. We put our names down for a walk and set off with a group of people walking the trails towards the ponds. We had to use torchlight to avoid standing on Common toads and newts crossing the paths. We heard a chorus of Natterjack's 'singing' in the distance and upon reaching the ponds, we dimmed our torches to observe Natterjacks and Great crested newts. In the distance, further into the Dunes we saw torchlight and John said that's the 'Gem's volunteers' checking ponds. That is how I first heard about the project. The rumours that Fiona found me on the dunes and dragged me into the office to sign up are untrue.

I joined the ‘Gem’s in the dunes’ project in April 2018 and I am currently licensed to survey for Sand lizards, Natterjack toads and Great crested newts. I need the latter two licences to monitor a series of numbered dune slack ponds during the amphibian’s active seasons. I also do habitat restoration work and pond creation with other ‘Gem’s volunteers.

The Sefton sand lizard’s native population originates on the coastal dunes of Merseyside, although captive breeding programs have allowed it to be introduced elsewhere, mostly to replace extinct populations. A Merseyside sand lizard has a distinct pattern and colouration which usually allows them to be visually distinguished from Surrey or Dorset sand lizards. Although genetic diversity is desirable, out-breeding to southern lizards would probably lead to reduced fitness, so that should never be done. Conversely, extremely small populations can lead to inbreeding so our efforts are focused on preventing that happening.

I survey for Sand and Common lizards across the Sefton coast but in addition I have my own SSSI unit to monitor. It was originally part of the coastal dunes but there has been increased housing development since the early 20th century. Now it is a modified and isolated fixed dune system which is becoming woodland, and it has quite a heavy footfall. Due to nearby houses, cats are also predators. Although work is needed to maintain areas of open sand on the fixed dunes, the insect load available to lizards is much greater than the frontal dunes.

A benefit of spending time monitoring a single site over the active season is that instead of presence/absence surveying, individuals in the population can be photographed and then identified over time, as sand lizard individuals have unique individual scale pattern markings.

When photographing a lizard, I try and capture it’s side, head and back markings and then use that data to identify it as a known or new individual. 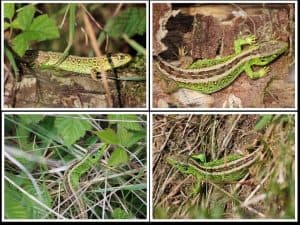 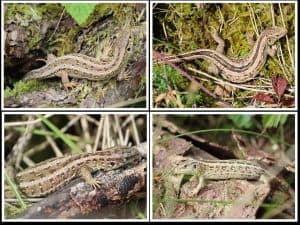 Hatchlings which have distinctive markings can be followed throughout their life. They typically display a unique pattern of white lateral stripes which are later framed by black spots or patches. 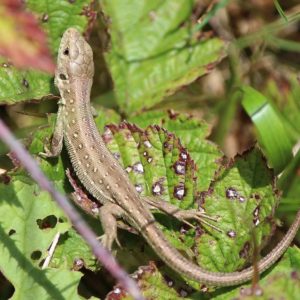 I compared over a thousand photos to identify specific lizards. Using a lizard I.D reference code, survey date and time and grid reference data, I have started to produce maps with the aim of following an individual’s location throughout the active season and then hopefully in future years. In 2019, I positively identified about eighty immature/adult sand lizards and thirty hatchlings on this site.

Mapping individual’s behaviour revealed that adult’s and hatchlings typically inhabit a relatively small area, for basking and feeding and they can usually be located again during later surveys.

Juveniles who have emerged from their first hibernation usually stay within their familiar surroundings near their burrows to hunt and grow. They then migrate later in the season, probably to find somewhere to hibernate and breed the following year. The young lizards I have followed up to now have moved towards area’s inhabited by other lizards not to new areas that would extend the lizards range.

One immature female was located a number of times over a five-month period. She then migrated through dense marram, scrub and some woodland to a location 80 metres away where I recorded her a few more times on a small bank, up to the end of the active season.

As it is a fixed dune system with spreading woodland, and some non-native garden species, scrub removal needs to take place throughout the winter. 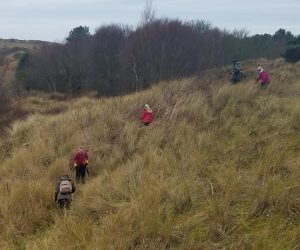 Volunteer’s removing scrub from a bank. 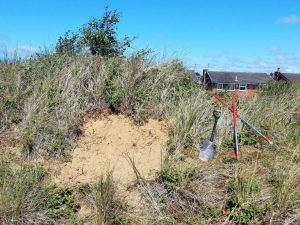 Surveying is usually done between March and October.

The data collected about the sand lizard population will help to ensure the sites continuing status as a SSSI is secure. It will also help to inform the landowner’s future decisions about habitat management which I hope allows further connectivity between populations.

My aims are to identify fragmented populations, establish connective corridors and maximise the lizard friendly habitat. Success over the coming years will be measured by a larger lizard population than when I started, spread over more of the habitat.

I recommend that volunteer’s take responsibility for surveying a site, which ever species they study, and to continue their work after the current project’s end which I think would be a measure of the success of ‘Back to the Brink.’

Gems in the Dunes volunteer