A couple of months back during a historical record search, one of my colleagues came across a record for a species called Martin’s Ramping Fumitory about 5 minutes away from my house. After speaking to the allotment where the record had been submitted in 2010, they invited me to come and have a look for myself and find out more about the plant, the history of the site and how they look after it. 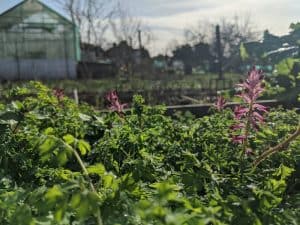 I arrived there about 10am and was met by Martin, who looks after the allotment plot and took me to plot where they had seen the fumitory. As if luck would have it, “Tiny”, the gentleman whose plot it was growing on was on the site and was really happy to answer my questions. 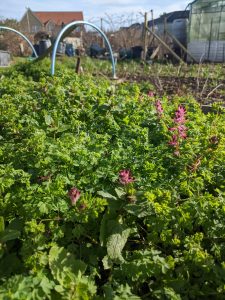 It turns out that the species was identified by accident, almost! Over the road, there was a plot that was earmarked for a development which was being assessed by local ecologists and they happened to stumble upon the area of Martin’s Ramping-fumitory. Apparently, Tiny only noticed what they were doing as they were lying on the floor with hand lens looking very giddy and excited! 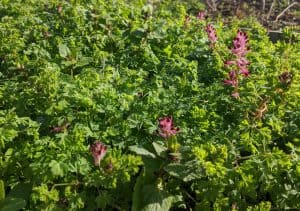 As a result, the area, although reduced in size, still covers a large area of the plot and appears to be well established here – when recorded in 2020 it was only the fourth such surviving site in Britain. I asked Tiny a few questions about how it was looked after and what they do, and ask it turns out…they don’t do too much! All he noted was that it doesn’t really like “dirty ground”, (however, we did spy it growing out of a compost heap when we left the allotment!) and likes it when there is mature spread. One area, is growing in a raised planter, but other sections of it are just growing freely. It’s very popular at the site – both with allotment holders and chickens apparently – they used to love nibbling on it! 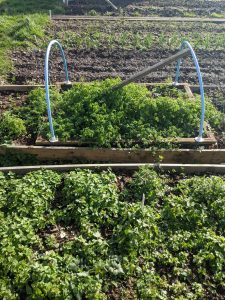 The plant itself looks after itself – “it’s not treated with any love or respect and it still thrives!” It appears to be very hardy and seems to be able to survive most things, but he had noticed in really strong sun that it “knocks back” but comes back every year.

Tiny has had this allotment plot for 30+ years and although the plant record is only from 2010 there is quite a lot of rich history for the site – it was gifted to the community in the 1600’s and Shakespeare used to visit.

You can find out more about this plant on the Plantlife website (www.plantlife.org.uk) or more about this family of plants on this crib sheet https://naturebftb.co.uk/wp-content/uploads/2019/08/Fumitories-and-Ramping-fumitories-crib.pdf

Colour in the Margins have also launched an allotment project called the Arable Seed Swap so if you would like to get involved and have an allotment then please do join the group or email zoe.morrall@plantlife.org.uk for more information.

Colour in the Margins Outreach Officer