Georgie Bray the Farm Manager at Hope Farm, the RSPB’s flagship arable farm in Cambridgeshire, tells us about the progress of the reintroduction of Corn Buttercup there

Corn Buttercup, like Cornflower, Corncockle, and other flowering arable plants, were once an abundant sight in farmers’ fields. My grandparents remember these species being as common as Wild Oat 50 years ago. However, when I asked my parents, who spend as much time working the land as the generation before, they could not even tell me what these species looked like. In the last half century, herbicides have become incredibly efficient at controlling almost all arable weeds and the pretty yellow flowers of Corn Buttercup have all but disappeared from the landscape. Even at Hope Farm, Corn Buttercup has not been recorded in the surrounding area for almost 40 years. 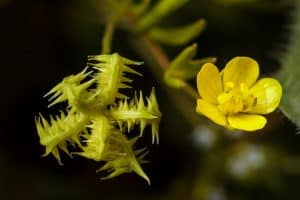 Plantlife have been working with us at the RSPB as part of the Back from the Brink, Colour in the Margins project, to bring back rare arable plants including Corn Buttercup. This is important not just to prevent the extinction of the species, but to maintain diversity in the farmland ecosystem, and help other small species to survive that may use Corn Buttercup for part of their life cycle.

When Plantlife first spoke with us at Hope Farm about reintroducing the species, it soon became apparent why Corn Buttercup did not stand a chance in most modern agriculture systems. We went through with our agronomist, looking at the different herbicides that are commonly used on the farm. Just about everyone would do a quick job of killing this plant. Lots of wild plants at Hope Farm do well in the grassy field margins, where we’ve kept more common species like Knapweed, Oxeye Daisy and Yellow Rattle a common sight. However, arable plants like Corn Buttercup need annual cultivation to germinate, and the only cultivated areas at Hope Farm are cropped fields where these herbicides are used, so the species is really stuck between a rock and hard place in a system that is not organic.

Deposited at Kew Millennium Seed Bank are Corn Buttercup seeds collected from a Cambridgeshire field with roadworks back in 1978. Forty years later and funding through Back from the Brink enabled Kew to grow on some of these seeds into healthy mature plants producing 50,000 seeds. Each seed was monitored from germination, flowering, to setting seed under carefully controlled conditions, and these plants were then harvested for seeds to scatter at Hope Farm (under slightly less controlled environmental conditions!). 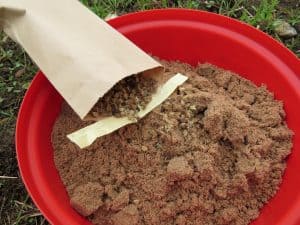 Corn Buttercup seeds about to be mixed with sand for
sowing at Hope Farm (c) E.L. Cooke

In autumn 2019, having received delivery of the precious seed cargo in brown paper envelopes, we were thankful for help from Plantlife to make sure we got this seed sowing just right. We chose areas with the heavy clay soil suited to the plant that we could easily access to cultivate, that were also well protected from any herbicide use in cropped fields. After hand sowing 20,000 seeds across 200 m2  on the farm, it was a long wait through winter, checking to see if any seedlings had sprouted.

Every few weeks we would nip over to the plots on our way back from supplementary feeding for the farmland birds. Admittedly, at the begging of autumn this was a weekly occurrence, but our enthusiasm waned as the winter wore on! A few weeks ago now, we were thrilled to spot a seedling well past the two-leaf stage in our plot. We then got hunting before spotting another, and another… there were loads of them! Fingers crossed that this year, with favourable conditions, they will sprout yellow flowers, and then seeds, to maintain a stable population. 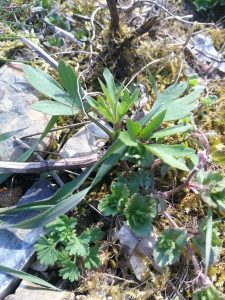 It is our aspiration for Hope Farm to remain a safe spot for Corn Buttercup for years to come. Each autumn we’ll cultivate the plot to reflect the arable field conditions the species thrives in and hopefully provide enough seeds for other reintroduction projects on other farms. It is a pleasure to work with Plantlife on this project, and I look forward to seeing what the future brings for this species in South Cambridgeshire.