It’s blazing hot, my legs are starting to cramp and sharp limestone is digging into my knees, but I can’t move too often for fear of starting a landslide. Perched half-way up a scree slope peering intently into the calyx of a flower only a couple of inches tall to see how ripe the seeds are isn’t quite what I expected for my first season of monitoring Red Hemp-Nettle on Cleeve Common, working as Conservation Officer for Cleeve Common Trust. It’s a relief when it’s done, but very satisfying once the data has been entered and I find that a new colony of the plant has exceeded expectations and produced more seed in its first year than was used to seed the colony. 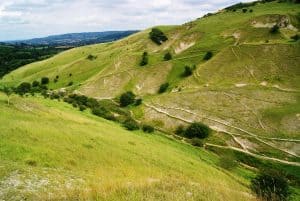 Cleeve Common, the highest point of the Cotswolds overlooking Cheltenham, is home to the Critically Endangered Red Hemp-Nettle (Galeopsis angustifolia) which grows on scree left over from limestone quarrying, rather than the more usual arable margins. The plants at Cleeve Common seem to be smaller than some other sites, many of them only reaching two to three centimetres tall and only having one cluster of flowers. This is probably because of the extremely harsh surroundings which do at least prevent most other species from competing with them. The loose scree is extremely dry and quite mobile. Small landslips caused by sheep or rabbits (or surveyors) mean that the surface gets turned over, much like cultivation of an arable field, meaning that so far, no management has been required to keep the colonies going. 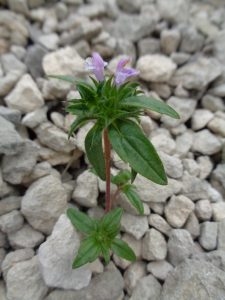 For several years, Cleeve Common Trust who look after the site have worked with Kew Millennium Seed Bank to try to secure a better future for this beautiful and rare little flower. In 2013, seed from Cleeve Common was collected and sent to the Millennium Seed Bank where plants were carefully nurtured over the course of several years to provide a large supply of seed. Using some of this seed, the original three colonies at Cleeve Common have now been boosted to eight and all are monitored annually. 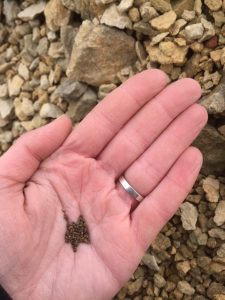 We are delighted that Colour in the Margins have now taken things a step further, funding Kew Millennium Seed Bank to grow on more of the seeds that came from Cleeve Common, producing thousands more which have been used to introduce Red Hemp-Nettle to other suitable sites in the Cotswolds. Several arable farms, a quarry and a steep road verge have been sown and we have our fingers crossed that it will take hold in at least some of these sites and form new colonies of this tiny jewel of a flower. 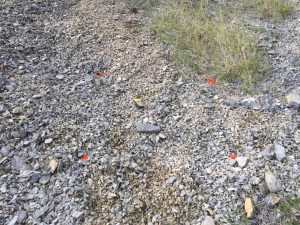