Pheasant’s-eye is blooming again at Ranscombe Farm, after … how many decades? Five? Ten, More? It was certainly here once – the 1899 Flora of Kent notes that it was found in the chalk hills around the village of Cuxton, which must surely have included the arable slopes of Ranscombe. Pheasant’s-eye was once so common in the countryside in South-east England that it was gathered up and sent by train to the flower markets of London, to be sold as ‘Red Morocco’. Now it is so rare as to be officially listed as ‘Endangered’ – just one step down from ‘Critically Endangered’, which itself is just one step from ‘Extinct in the Wild’. Here in Kent, in recent decades it has been found in just a couple of locations, and has struggled to persist in either.

Pheasant’s-eye is a plant of tremendous romance, and not just for its rarity and beauty. Its scientific name is Adonis annua, named by Linnaeus himself after the handsome mortal of Greek myth who was lover of both Aphrodite, goddess of love, and Persephone, Queen of the Underworld. The blood of the dying Adonis was said to have mingled with Aphrodite’s tears and become the anemone flower; perhaps Linnaeus thought the blood-red flowers of Pheasant’s-eye – which do resemble anemone flowers – were more likely to have sprung from this source. 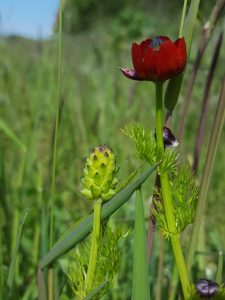 But this romance – part of the joy of the plant itself – must be tempered by science if we are to see its return. And the plants now blooming at Plantlife’s Ranscombe Farm Reserve are part of an experiment to find the best methods for re-establishing wild populations of Pheasant’s-eye. Measured amounts of seed were scattered last summer over eight small plots, four on chalky soil and four on clay. Recently, four plots – two on clay and two on chalk – received a light dose of slow-release fertiliser. Later this year, it is hoped that counts of individual plants, of seed-heads, and, if possible, of the numbers of seeds produced, will help us gauge both the initial germination success and the effect of soil type and soil fertility on the plants’ productivity.

The results, as yet, are far from certain. Pheasant’s-eye is notoriously difficult to germinate, with the advice from Kew’s experts being that seeds need to lie on the soil surface through a large part of summer, baking in the sun, for the plant embryos to develop. From 7,200 seeds sown at Ranscombe at the end of last July, only 16 seedlings were found at the end of October. Whether more have sprung up since, we do not know, our survey work having been held back by the coronavirus lockdown. We also need to compare our results with those of other sites, where seed was sown after being ‘pre-baked’ in the lab rather than being left out in the sun – we know they’ve had success too, but how does their germination rate compare with ours? 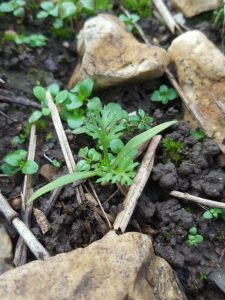 Seedling of Pheasant's-eye in October 2019

What we do know, at least, is that some of our seedlings at Ranscombe have survived the winter, grown up, and started to flower – in fact flowers were spotted in April, something of a surprise for a plant which is not supposed to flower till July.  Better yet, those flowers have started to set seed and we may be at the start of a long flowering season. If the plants can make more seed than we initially sowed, then there is a chance that the population can grow. And if we can get the population to grow, we will understand at least something of the mechanism for properly restoring Pheasant’s-eye – the beautiful and romantic Adonis – back to the farmed landscape. 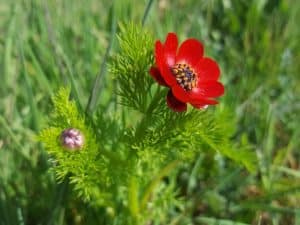