On 5th – 7th June alongside the People’s Trust for Endangered Species (PTES) we will be launching a Stag Weekend with a difference – and one that you can take part in during lockdown too! Guest blogger Laura Bower, Conservation Officer at PTES, provides everything we need to know about Stag beetles, including tips for the garden and how to record your sightings!

Stag beetles
Stag beetles are one of the most spectacular insects in the UK. The male’s large jaws look just like the antlers of a stag. They spend most of their life underground as larvae, only emerging for a few weeks in the summer to find a mate and reproduce. Stag beetles and their larvae are quite harmless and are a joy to watch. Find out more about stag beetles with this fact sheet, plus children’s fact sheet.

What is Stag Weekend?
Stag Weekend is a celebration of stag beetles. Across the weekend of 5th – 7th June we will be celebrating all things stag beetle, including sharing our top tips for turning your garden into a stag beetle sanctuary, showing how to identify stag beetles and their larvae, and advising on what to do if you’re lucky enough to see one. We want to hear all about your stag beetle sightings, see your photos and you can even take part in our special stag beetle quiz on social media too. If you’re on social media, we’d love to see your photos using #StagWeekend @PTES @buzz_dont_tweet 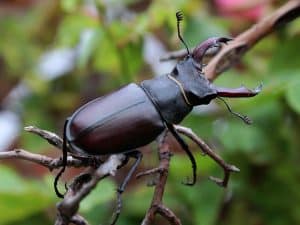 Where are stag beetles found?
The stag beetle range stretches across Europe. The UK is at the north-west edge of its range and we seem to have a stronghold here, as you can see from this map. Although stag beetles have experienced historical population declines here in the UK and their numbers appear to be stabling, they still need our help. Stag beetles are now even extinct in two countries in Europe, so it’s important that we protect these beautiful beetles and do all we can to make our gardens, parks and woodlands a haven for them. 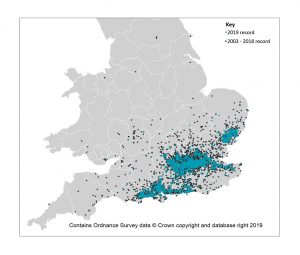 How do I know if I’ve seen a stag beetle?
Stag beetles are large black beetles with chestnut wing cases and distinctive antler-like jaws. You can learn how to distinguish them from other similar beetles here. 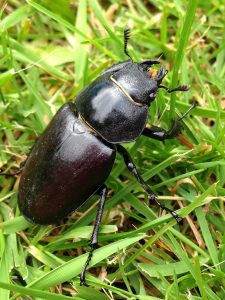 What should I do if I see a stag beetle?
If you find an adult stag beetle, please leave it where it is, unless it’s in danger of being run over or trodden on. If you have to move a beetle for its own safety, then please move it as short a distance as possible. If you dig up a stag beetle larva, please put it back exactly where you found it. The next best thing is to re-bury the larva in a safe shady place in your garden with as much of the original rotting wood as possible. Then please report your sighting.

Where can I report my sighting?
At PTES we’ve been running the Great Stag Hunt since 1998. Over the last 20+ years we’ve had thousands of stag beetle sightings from all corners of the UK, which is brilliant, but in order to learn more about where they’re still living and where they most need our help, we always need more sightings. You can help by telling us when you see either larvae or adults by simply recording your sightings.

If you have more time why not try a Stag beetle count!
This annual survey is part of a European-wide study that will allow us to see long-term trends and take action where and when needed. Anyone who lives in an area where stag beetles are found can join in from 1st June 2020. There are two ways you can take part:

How can I help stag beetles in my garden or green space? 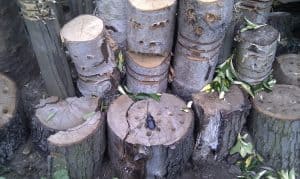 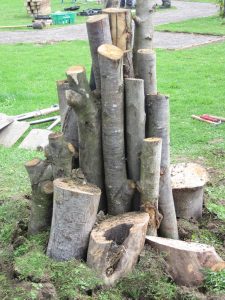 Other tips to help stag beetles

More about stag beetles
Stag beetles spend most of their very long life cycle underground as a larva. This can be anywhere from three to five years depending on the weather. Periods of very cold weather can extend the process. Once fully grown, the larvae leave the rotting wood they’ve been feeding on to build a large cocoon in the soil where they pupate and finally metamorphose into an adult. Adults spend the winter underground in the soil and usually emerge from mid-May onward. By the end of August, most of them will have died. They do not survive the winter. Female stag beetles prefer light soils, which are easier to dig down into and lay their eggs. Newly emerging adults also have to dig their way up through the soil to reach the surface, therefore areas like the North and South Downs, which are chalky, have very few stag beetles. They also prefer areas with the highest average air temperatures and lowest rainfall throughout the year.

Conservation
Stag beetles are legally protected from sale in the UK. They are also classed as a ‘priority species’, listed on Schedule 5 of the Wildlife and Countryside Act 1981. These magnificent beetles are Red listed in many European countries and have undergone a decline across Europe. They have gone extinct in Denmark and Latvia, although there has been a successful reintroduction into one site in Denmark in 2013.

Conservation Officer at the People’s Trust for Endangered Species