Earlier this year, the Dorset's Heathland Heart team commissioned a student project, working in collaboration with the Arts University Bournemouth, to make a scale model of one of our priority species.  This was done with the objective that the finished species model would be used by us as a valuable teaching aid and interpretation piece for public events and activities.

We were really pleased that student artist, Keren Early, chose to create a scale model of the Heath bee-fly (Bombylius minor), an endemic heathland species. 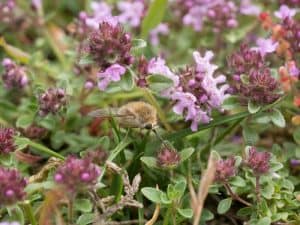 As with all Bombylius species, the Heath Bee-fly is a bee mimic and not a bee at all. They have a distinctive fluffy body and long spear-like proboscis (tongue) which is used to feed on the nectar from flowers. At just 7-8.5mm in size the Heath Bee-fly is smaller than the more common Bee-fly species, including Bombylius major, which can be found in other habitats including gardens.

Bee-flies are most easily identified when basking as they are fast flyers and generally hover over flowers without settling. They can fly backwards as well as forwards, and have a distinctive high-pitched buzz.

Keren very kindly let us interview her about the project, here is what she had to say:

Q. Tell us about yourself?
A. My name is Keren Early, I am 22 years old and originally from London.

Q. What course are you studying at University?
A. BA Model Making at the Arts University Bournemouth. 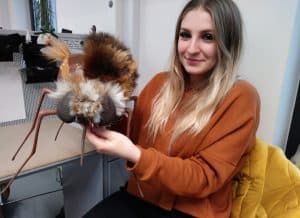 Keren with her Bee-fly model in progress (c) A. Roe

Q. Why did you choose this course?
A: I first got into model making from an art and design prospective and wanted to pursue this art form. I have a love for nature and all its beautiful wildlife, so when I got the opportunity to work with Back from the Brink I was really happy.

Q. What attracted you to working with the Back from the Brink Project?
A: The opportunity to make an impact using my skills and passions, which is why I got into art in the first place. I was really happy to be able to help raise awareness for such a beautiful insect.

Q. Why did you chose to make the Heath Bee-fly?
A: Through my researching into the wildlife that populate the heathlands around Dorset I looked into the life-cycle of a Bombylius Minor and found it so interesting. My particular interest was in the way they protect their lava. Throwing it into the larval burrows of another insects to raise them.

Q. What new skills did you develop? And what where the challenges?
A: During the making of this model I tried many new processes such as using liquid resin, hair punching with synthetic hair, and welding. I found the hair punching particularly hard due it being a very time consuming process and quite tedious at times! 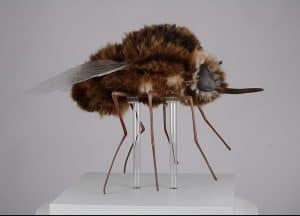 Q. What have you learnt about this species? And its habitat?
A: While researching about this amazing creature I also learned about how many different types of species there are on the heaths and how much they need protecting.

Q. Has working on this this piece inspired you in any other ways?
A: Doing this brief with Back from the Brink has inspired me to know more about where I now live in Bournemouth. To plant flowers that encourage wildlife, and protect the populations of the Bombylius Minor by educating the people around me.

Q. Have you increased your knowledge and interest in wildlife conservation?
A: Yes my interest has grown so much in this subject not only about the Bee-fly but also other animals that inhabit the heathland areas.

Q. Anything else you want to add?
A: I really enjoyed working with the BftB team on this project, they have been amazing and very helpful! Keren

Thank you so much to Keren for all her hard work, even all that hair-punching! It was really worth the effort as the finished piece looks brilliant. Just for reference the model was made on a 25:1 scale of the bee-fly’s life size. So it will be much easier to spot then the real thing! But don’t let that deter you from trying to see them in the wild.

Where to find these special creatures - out on Dorset’s lowland heaths, the Heath Bee-fly is generally seen along sandy paths, south-facing banks and slopes. 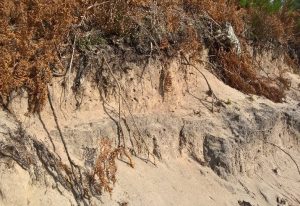 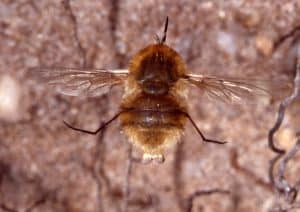 If you are really lucky you may catch it egg-flicking, as Keren mentioned; where by the adult flicks its eggs towards the larval burrows of its young’s host species, such as solitary mining bees. It can also be found nectaring on flower-rich habitat adjacent to heathland.

Sadly this species now appears to be confined to the heaths of East Dorset which supports some of the best remaining fragments of lowland heath in the UK. But it has previously been recorded in the New Forest, the Isle of Wight, the Isle of Man and the coast of West Wales, so keep your eyes peeled!

The Dorset Heathland Heart project is working with conservation organisations locally to protect valuable habitat on which these species depend and to raise awareness of their conservation needs through education and citizen science.

Outreach Officer - Back from the Brink, Dorset's Heathland Heart