While many of the project team are either still furloughed or working from home under house arrest, it’s been more challenging for the project this season than anyone could have predicted. As with so many of our activities which sadly either had to be postponed or cancelled altogether, monitoring of godwits had to be scaled back to a bare minimum. Subsequently, the project had to rely on the site managers of WWT Welney, RSPB Nene Washes and RSPB Ouse Washes to monitor the godwits when they could, on top of their already very busy workloads.

29 head-started godwits are known to have returned to the Fens this breeding season and four spotted on the Continent, thanks to reports of sightings of colour rings. A question that many godwit aficionados out there may have is ‘How many head-started godwits from last year have returned this year?’ Young black-tailed godwits often don’t return to the UK from their first migration until the age of two – but some do venture back earlier.

One of the 2019 head-started birds to have returned this year is Tam. This one-year-old male has been at the Ouse Washes since May this year, moving between WWT Welney and RSPB Ouse Washes nature reserve.

Tam was named in honour of the Scottish prisoners of war brought to the Fens of East Anglia in the 17th century. These soldiers built the New Bedford River and many of the drainage works that created the landscape of the Fens as we know it today. Jean Rees-Lyons, Artistic Director of The Word Garden helped name some of the head-started birds of 2019 as part of ‘the ‘Origins Project’, remembering the Scottish Soldiers. 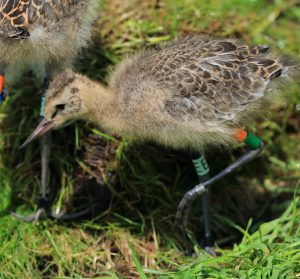 Tam pictured here as a chick in a rearing aviary at WWT Welney in June 2019.

Head-started female Omaha has been back at WWT Welney since May. She was named in honour of the 75th anniversary of the D-Day landings. Omaha Beach, Normandy was one of the five designated beaches that were used during the D-Day landings on 6 June 1944 during the Second World War. 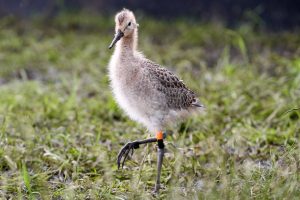 Omaha in a rearing aviary at WWT Welney in June 2019.

Barker was released as a chick at WWT Welney in June 2019. She returned to the Ouse Washes in May and has been spotted a number of times since then, in June.

Did you know ‘Barker’ is an old name for a godwit, along with blackwit, whelp, yarwhelp, shrieker and Jadreka snipe?! 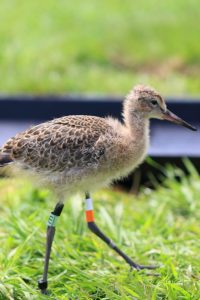 Barker as a chick last June at WWT Welney. 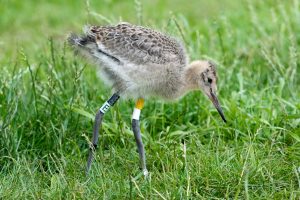 Cloud in a rearing aviary at WWT Welney in June 2019.

What about head-started birds released in other years?

Strider was released as a chick at RSPB Nene Washes in June 2018. After spending much of the second half of 2019 in west France, Strider (sex unconfirmed) was spotted in Dellmensingen, south Germany in May. Six weeks later in mid-June, this two-year-old was spotted at RSPB Ouse Washes! 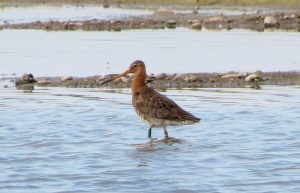 Due to the lockdown, it is unknown exactly how many pairs have bred at each project site this spring. Nonetheless, we are aware of some pairings. 2017 head-started godwits Anouk and Delph paired and bred at WWT Welney; two-year-old Morgan paired with a wild-reared female at the RSPB Pilot Project site (adjacent to the Ouse Washes); and three-year-old Lil bred at WWT Welney with a wild-reared male.

After pairing with a wild-reared male, 2017 head-started female Earith bred at the RSPB Pilot Project site this season. Of the four chicks which hatched, we believe three fledged. 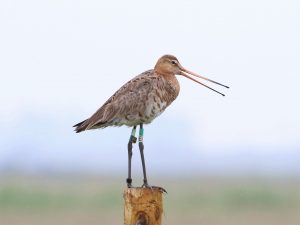 Tom was spotted in May at WWT Welney. Before then, he was last spotted in March 2019 at the Giganta ricefields near the Tagus estuary in Portugal. 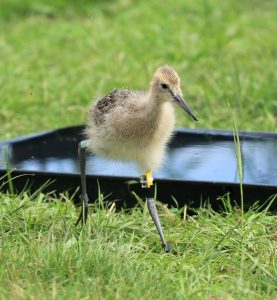 Another young godwit that was in the Tagus estuary in February is two-year-old Hurricane, now back at WWT Welney since May. Hurricane spent last spring near Valencia, Spain, therefore this is the first time he’s been back in the UK since being released as a chick at RSPB Nene Washes in June 2018.

Maris was first spotted in the Netherlands in May 2019 in Aldwaldmersyl, then she returned to the Netherlands again – this time to Zuiderwoude in May this year. The fact this godwit is spending another spring here suggests she has joined the Dutch breeding population of black-tailed godwits.

Meanwhile, after not being seen for almost two years, Maris’ brother Désirée was reported from IJzervallei, near Woumen in Belgium in May and appears to be breeding at a nature reserve there.

Désirée and Maris are part of the ‘Muddy Potato’ posse, so-called because they were amongst many eggs in the spring of 2018 that were so muddy, they resembled potatoes. These eggs were rescued from arable farmland when the godwits’ main breeding sites at RSPB Nene Washes flooded that spring, forcing the adult breeding pairs to lay their eggs elsewhere. 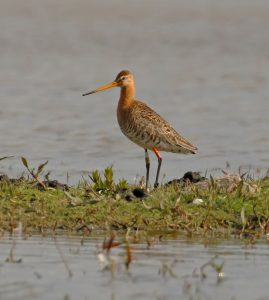 Fascinatingly, Désirée and Maris’ brother Jersey has been spotted in Bavaria (May 2019), suggesting this brood seem to have a penchant for spending the breeding season outside the UK. Intriguing!