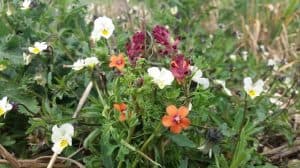 There is only so much that an individual land manager, acting in isolation, can achieve on their own. By working together in a group or ‘cluster’, helped by a chosen advisor, farmers can work more cohesively together in their locality. This enables them to collectively deliver greater benefits for soil, water and wildlife at a landscape scale.

The Martin Down Farmer Cluster was formed in the Cranborne Chase area of Dorset and Hampshire in 2016 and is one of three Farmer Clusters surrounding Martin Down National Nature Reserve. Together, this ‘supercluster’ cradles the nature reserve, covering an area of 236 km2.

Map of the Martin Down supercluster 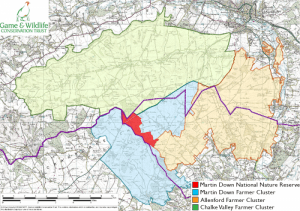 43 farmers across the three clusters have united in their aim to protect and enhance the iconic and threatened wildlife of Martin Down and the farmland wildlife of the surrounding land. The three groups share many target species and priorities, including Turtle Dove, Hedgehogs, soil organic matter and arable flora. 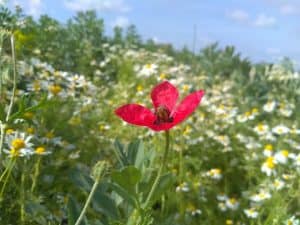 A rich community of arable flora is an asset that many of the members of the Martin Down Farmer Cluster are proud of. Not only are they a part of our agricultural heritage and important in their own right, but they also play a critical role in the arable farmland food chain and are a key part of conserving our target farmland bird species.

Before we started surveys in 2017, next to nothing was known about the arable plants in the cluster area. But after walking field margins and other likely areas, we have found 26 notable plants present across the farms surveyed – including Fine-leaved Fumitory, Prickly Poppy, Venus’s Looking-glass, Corn Parsley and Night-flowering Catchfly. Despite this number being a good start, it’s very likely that there is more to find in the soil seed bank. We’re just waiting for Pheasant’s-eye to pop up somewhere – it has been spotted nearby on the Allenford Farmer Cluster! 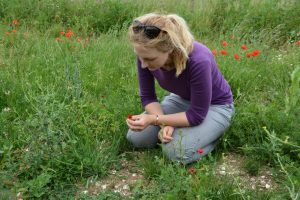 Pheasant’s-eye has been found at two sites in the neighbouring Allenford Farmer Cluster. The hunt continues across the Martin Down Farmer Cluster – it’s got to pop up somewhere! Photo: Pete Thompson

So, after totting up our species list after three years of surveys, we have found that most of the cluster area is of National Importance for rare arable flora according to Plantlife’s Important Areas for Arable Plants (IAPA) scoring system.

In order to encourage these rare species, every farm in the cluster has some management in place that is sympathetic to their establishment and life-cycle – be it a lapwing plot, a cultivated margin for arable flora, or wild bird seed mixtures. Almost 30 hectares of new habitat from which arable flora will benefit has been created in the last three years. 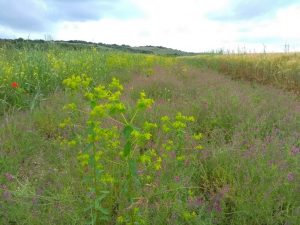 A cultivated margin for arable flora, rich in Dense-flowering Fumitory and Broad-leaved Spurge. Turtle doves have been spotted here, feeding on the Fumitory and Black Medick seeds. Photo Jess Brooks.

Some of our cluster members have gone the extra mile, though. On one farm, after a brand new network of perennial wildflower margins was created as part of a stewardship scheme, lots of rare arable plants were turned up during cultivation presenting a bit of a conundrum. Do we want a perennial wildflower habitat corridor linking up two SSSIs, or do we want to encourage these important arable plants? Admirably, the farm manager decided to take a hit, and take out two metres of his crop in multiple fields in order to cultivate margins for arable flora between the crop and the perennial wildflowers (as shown below). Now, we’ve just got to hope that some of the rare plants crop up in this new margin, to reward the effort!

Let’s hope we make many more discoveries in the years to come across the Martin Down Farmer Cluster!

Keep up to date with us on Twitter @MDSuperCluster