As many of us wander through the arable countryside for exercise, dog walking or to appreciate the stunning array of plants that surround us, I wonder how many of us stop to think about what lies beneath our feet and the history of past generations that have walked there before us?

To have the opportunity to deliver a brand-new Countryside Park for the benefit of wildlife and the community is an exciting challenge. The prospect of starting with a blank canvas with endless possibilities for interpretation themes allowed us to explore all of the amazing things about arable landscapes. Whilst we revelled in celebrating the amazing wildlife and stunning views offered at Dawlish Countryside Park, we were also very keen to delve into its past and learn about its history!

To begin with, a visit to the Devon Records Office and a look at the tithe maps revealed that the three main wildflower grassland plots we have today were once thirty five separate arable fields used by various landowners- each field with its own, often quirky name. We wanted to learn a bit more about the types of farming that happened here, the type of equipment they might have used, and any indications of what life was like in the past. 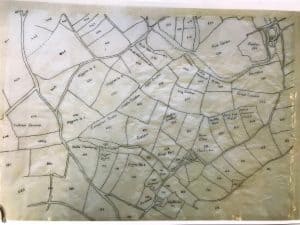 We had special permission to allow a metal detectorist onto the site for a short period of time who scanned only half of the Park but revealed some staggering finds. All finds were taken to RAAM (Royal Albert Memorial Museum & Art Gallery) in Exeter for verification.

In this first picture, you can see a large piece of a Devon Plough almost certainly pulled by four Oxen which has sheared off. Wearing yokes instead of collars like Horses, the last Oxen to work in the county was recorded in East Devon in 1878. 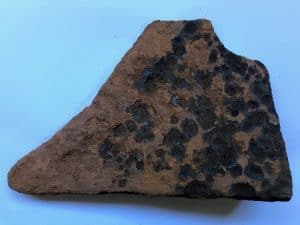 Other assortments of ironmongery found included chain links and drag harrow spikes dating back over 200 years. 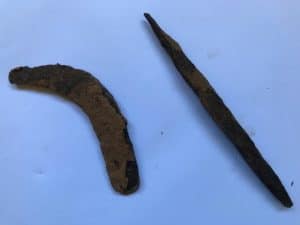 In this third picture, you can see a mixture of pottery found at the Park. Most of it is fairly recent with examples of Victorian drainpipes, but at the top you will also see 13th Century green glazed pottery. The Victorians were great innovators and engineering was limited only by the materials available to them. There are three main ceramic types- earthenware, stoneware and porcelain. You will also notice the piece of clay pipe and a honing stone. Kept in a farmer’s pocket, a honing stone was easily accessible to maintain sharp edges on sickles and scythes during harvest time. 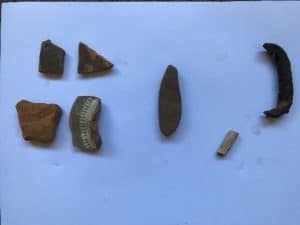 You can see from this varied collection of metalwork that there is plenty of history to be discovered just beneath the surface.  Here you can see amongst other things musket balls made by pouring molten lead or alloy into a two-part mould. The mould seam is the thin line around the circumference of the musket ball. They were categorised not by diameter but by how many musket balls would weigh a pound. You may also be able to see several Georgian six pence’s, watch faces and even Georgian shoe buckles! 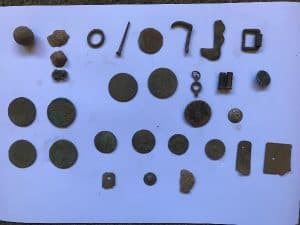 Most excitingly, even greater treasures can be found within the arable landscape. In this picture you can see a collection of flints.  The two flints at the bottom of the picture have been confirmed as Neolithic. In particular the arrowhead flint shows marks of ‘percussion’ where the flint has been struck to chip bits off until the desired shape is achieved. This process will have happened by Neolithic people at Dawlish Countryside Park some six thousand years ago! 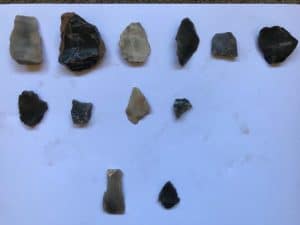 So,  when you next enjoy walking through your local arable landscape, allow your mind to ponder what stories may be locked up in the history beneath your feet!