Anyone who doesn’t have at least some degree of admiration for the feat of bird migration either isn’t aware of the challenges involved or must lack any sense of wonder and imagination. A new wave of sightings of black-tailed godwits from outside the UK have just flooded in to the team at Project Godwit. For me, receiving these sightings and learning more about the life histories of these incredible migratory wading birds is the best part of the job.

Black-tailed godwits which breed in the UK are of the Limosa limosa limosa sub-species and mainly breed in the East Anglian Fens of Cambridgeshire and Norfolk, plus a few sites in the south-east and north-west of England. A small number of the sub-species L. l. islandica also breed in Orkney and Shetland.

While L. l. islandica winters in Iceland, black-tailed godwits of the L. l. limosa race migrate south to Spain, Portugal or West Africa - to countries like Senegal, Mauritania and Guinea, 2800 miles away. 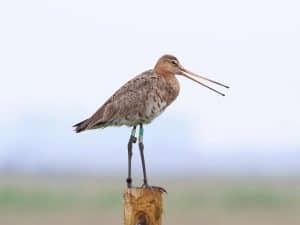 Black-tailed godwits use ‘staging areas’ (stop-over sites) on their migration route to rest and feed, in places such as the crucially important Tagus estuary in Portugal, which connects breeding sites across the northern hemisphere to wintering areas in Africa. It’s not just godwits from the UK that come here – Icelandic black-tailed godwits, plus godwits from the Netherlands (where the majority of the north-west European population breed) also gather here. Around 300,000 waterbirds of a plethora of migratory species including 80,000 black-tailed godwits stop here to regain energy and forage on the rice fields and mudflats of the Tagus estuary.

The Tagus estuary is designated as a Special Protection Area (SPA), a Wetland of International Importance (Ramsar site) and an Important Bird Area (IBA). Despite the vital importance of the area for biodiversity, the Tagus estuary is threatened with the development of an airport for Lisbon. This is another risk this species with its Near Threatened global status can really do without, especially when the UK population is already so small and vulnerable, not to mention the multitude of other reasons this airport should not be built.

Amongst some of the godwit sightings recently to have arrived in the team’s inbox is that of a female godwit reported from the Tagus estuary by Hugo Areal. This female was ringed as a chick at RSPB Nene Washes nature reserve, Cambridgeshire (the stronghold for the UK breeding population) an amazing 19 years ago and was spotted in what would be a part of the airport experiencing the highest levels of noise pollution and disruption if it goes ahead. This godwit has been seen regularly at the Tagus estuary over the years, in autumn and spring.

This female was observed breeding at the Nene Washes again this year. There have also been multiple sightings of this bird on the north Norfolk coast, at reserves like RSPB Titchwell and Norfolk Wildlife Trust’s Cley Marshes in late summer/early autumn, feeding up before migrating south.

Birds ringed by Project Godwit have a lime colour ring on the right leg stamped with the letter 'E' and can be reported to the team here. 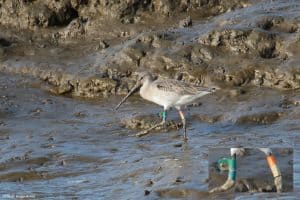 One muddy godwit - bearing the Project Godwit colour-marking scheme of a lime green ring on the right leg with a black 'E' (caked in mud here). The green flag attached to one of the left rings is a geolocator to track movement on migration (Photo: Hugo Areal). 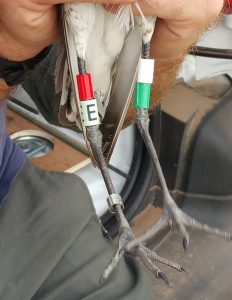 How Project Godwit’s colour rings look when clean - a lime green ring on the right leg with a black 'E' (Photo: RSPB).

One-year-old female godwit ‘Sky’ was reported at a national nature reserve near Yves in Western France in September by Jérémy Dupuy. Sky was head-started as a chick at WWT Welney Wetland Centre in June 2019 and released at the Nene Washes. This is the first observation of Sky since her release in well over a year - fingers crossed she will return to the UK next year to breed in the Fens. 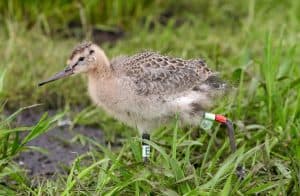 What is head-starting? It involves collecting eggs from a wild population, hatching them in incubators and rearing the chicks in specialised pens before release back into the wild population at fledging age (around two weeks old for godwits), to get them through the vulnerable egg and chick stages. By collecting the eggs early enough in the breeding season, the breeding pair is likely to lay another clutch for rearing themselves in the wild.

With only around 50 breeding pairs left in the East of England, head-starting is undertaken to help boost the population and try to avoid the UK losing them as a breeding species. During this five-year project which launched in 2017, 112 head-started godwits have been released to date, which on average has increased the productivity of the population by over 300%.

Project Godwit is a partnership project between the RSPB and the Wildfowl & Wetlands Trust (WWT) and it’s our colleagues at WWT who have the specialised expertise and experience in aviculture to deliver the head-starting conservation work. Head-starting is one of many elements to Project Godwit – creating and managing suitable wet grassland habitat, research and monitoring, plus community engagement also comprise the project’s objectives.

Head-started birds have been reported in 10 countries along the species’ migration flyway, including Portugal, Spain, France, Belgium, Austria, Germany, the Netherlands, Morocco, Senegal and Mauritania. Head-started godwits are also breeding in the UK, pairing with ‘wild-reared’ adults as well as with other head-started birds. 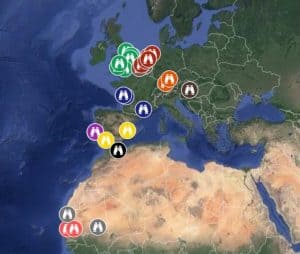 To date, head-started godwits have been reported from 10 different countries.

A male black-tailed godwit was spotted in September in the Algarve, Portugal - ringed as a chick at the Nene Washes in 2003. This godwit breeds at the Nene Washes every spring and was seen with its partner and chicks in May this year by a member of the team. Thanks to Dr José Tavares for reporting this sighting to Project Godwit.

Another one-year-old godwit head-started in 2019 has just been reported this week from Senegal, in Djoudj National Park near Debi. The female known as ‘Rainbow’ was last spotted in Senegal in October 2019, therefore she may have stayed on the wintering grounds this whole time. This behaviour is common for juvenile godwits, whereby they often don’t return to the UK breeding grounds until the age of two years. 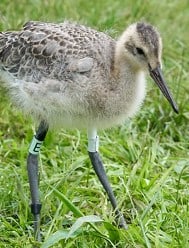 Rainbow at WWT Welney in June 2019, before release as a head-started chick (Photo: WWT).

Project Godwit and all our colleagues working to protect godwits are indebted to all who go to the trouble of reporting colour ring sightings. These volunteer recorders are making a significant contribution to conservation science, helping us better understand the movements of these migratory waders all along the migration flyway.

by Rebecca Pitman, Senior Project Manager for Project Godwit
Back from the Brink

Project Godwit is a five-year partnership project between the RSPB and the Wildfowl & Wetlands Trust with major funding from the EU LIFE Nature Programme, HSBC 150th Anniversary Fund, Natural England, the National Lottery Heritage Fund through the Back from the Brink Programme, Leica and the Montague-Panton Animal Welfare Trust.