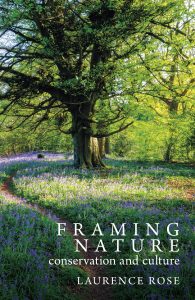 I finished my book Framing Nature – conservation and culture in the early days of the first lockdown, and spent the following weeks inhabiting two and a half acres – or 0.000000002% – of the Earth’s surface. It became a world within a world, and I found within it an infinity of other worlds.

The weather was good, and if it wasn’t one of the three days I spent each week working for Back for the Brink (and sometimes even when it was), I took to carting a makeshift desk across two fields so that I might work at the edge of a small wood. On a ‘Brink’ day, it is a place to escape the internet for a while and concentrate on some report or other. On a writing day, it can be a place to spend an hour perfecting a sentence, or a minute writing half a page. Once the book was finished, with no new project in the offing, I sometimes just sat and wrote of whatever transpired, in real time:

A small spider has appeared on my desk. It is an agile jumper and intricately patterned: each leg is covered in white hairs and finely flecked dark brown; its two palps are purer white contrasting with two coal-black, forward-facing eyes and its shiny black head on which is emblazoned a white anchor-mark. Its abdomen is shaped somewhat like an egg, milk chocolate in colour with three lateral white hoops. I have no idea of its identity.

The afternoon sun has highlighted a small sycamore tree that is about fifteen yards away. At its upper right-hand edge there seems to be a delicate mist that, on closer inspection comprises a socially-distanced swarm of dancing insects. They mesmerise me with their buoyant hovering, each describing looped curves that extend about four inches vertically, and swaying laterally with and against the breeze. They hold their very long, delicate, white antennae curved forwards. Collectively they give the impression of a vague and uncoordinated milling, but at a higher resolution, I see they are evenly spaced, seeming to respond to leaf, light and each other according to an algorithm that only they can compute. They look black, but I notice that their wings are iridescent, flashing bright green at certain angles to the sun. They are male green longhorn moths, assembled for their afternoon lek, to try to coax a female into their grasp.

The spider, by the way, is Salticus scenicus, the zebra-back jumping spider. The time it took me to write another paragraph was the time it took Twitter to improve the sum of my arachnological knowledge by a considerable percentage, albeit by the smallest grain in absolute terms.

This combination of fascination and ignorance is one reason why I write, and especially why I have been writing about invertebrates lately. As an ecologist and career conservationist I have never not appreciated their importance. Nor, in the six decades since I took my first steps, have I failed to appreciate the exquisite beauty in each one I encounter, in all their seemingly infinite variety. But I have never become an entomologist in the usual sense, that is, I don’t know much about them and can name very few.

Embedded in Back from the Brink is a kind of unspoken ethic – that alongside the traditionally charismatic targets of species conservation, the avocets and beavers, red squirrels and swallowtails, there must be an equal place for the small, lesser-loved things. Two Back from the Brink invertebrates crossed over into the other half of my life and became subjects for Framing Nature: the field cricket and the narrow-headed ant. They joined a third ‘Brink’ species, the willow tit, which sometimes calls from the trees around my outdoor office.

From the north east corner of the churchyard of St. Mary’s, Selborne, an old, wooden kissing gate leads out of the village down the steep slope of the Glebe Field. From there, Gilbert White, whose 300th birthday we celebrate this year, would have had a short walk from the church to the fields where he studied field crickets, the first person to do so. Last year I walked the same path, following in his footsteps by way of homage, although the crickets are now long gone.

Gilbert White’s own essay on the field cricket takes the form of a letter, written in 1779 to his fellow naturalist Daines Barrington. It opens with Virgil’s words resonant arbusta – the heathland resounds. It was a reference to the crickets’ stridulations – a resonant percussion-song that permeates the warm, scented night. As White explained to Barrington,

Sounds do not always give us pleasure according to their sweetness and melody; nor do harsh sounds always displease. We are more apt to be captivated or disgusted with the associations which they promote, than with the notes themselves. Thus the shrilling of the field-cricket, though sharp and stridulous, yet marvellously delights some hearers, filling their minds with a train of summer ideas of everything that is rural, verdurous, and joyous.

The song of the field cricket once resounded across the heaths and dry grasslands of Surrey, Sussex, Hampshire and the Isle of Wight, before falling silent from the summer night air everywhere, except in one last place in West Sussex, where fewer than a hundred individuals survived into the 1990s.

At the RSPB’s Farnham Heath reserve in Surrey, a reintroduction programme there saw the population grow to more than 300 individuals by 2016. However, the field cricket remained vulnerable. With Back from the Brink funding, the RSPB set out to increase the robustness of the population by translocating crickets within Farnham Heath itself. I joined about twenty other volunteers to help capture six to eight male and six to eight female crickets between us, the number specified on the specially-obtained license.

The earlier reintroduction had seen crickets spread from the far edge of the southern half of the heath north-eastwards onto more recently restored areas, and it was clear that they were capable of walking 200-300 yards in a season – in a lifetime, in other words. Having found the six males and six females we had come for, they were destined to be released to colonise the northern portion of the reserve, which they would be unlikely to reach unaided from the wrong side of a busy road. Surveys in 2020 have confirmed the success of the project, and that they have colonised neighbouring private land too.

At 1.11pm on 26 November 2018 the narrow-headed ant returned to Bovey Heathfield nature reserve after an absence of fourteen years. Buglife’s Stephen Carroll, who had painstakingly translocated a colony from nearby Chudleigh Knighton heath, marked the time precisely, so personal was its significance.  He had for years been one of a very few people to concern themselves with the fate of this little-known species.

I made two visits to the Devon heaths and the narrow-headed ants, accompanied by Stephen and freelance entomologist John Walters. After a few minutes eavesdropping on the conversation of enthusiasts, I was hooked. As I squatted to watch the ants at close quarters, I was soon imagining myself a visitor in their Lilliput:

Their hyper-crowded, three-dimensional cities are something out of Blade Runner, chiaroscuro worlds that never sleep, where vast armies are genetically programmed to perform endless menial tasks for the common good. There will be ants climbing to the uppermost reaches of the nest to absorb solar energy at its under-surface and returning to transfer the heat of their own bodies through the labyrinth, a living hypocaust. Others ferry their sibling pupae through the writhing tangle of vegetation, detritus and co-workers, forever up and down between storeys, constantly monitoring and regulating temperature in the brood.

A brief, narrow, slanting shaft of sunlight pierced the overcast of cloud that had kept the heath’s colours muted. I imagined those few seconds of increased warmth and enriched light and their effect on the microworld beneath. Each few photons energise in a birch leaf the synthesis of vital sugars. It is an industrial complex: from point of manufacture, the sugar is transported under pressure in pipelines built into the tree’s structure. Aphids tap the supply-lines and siphon off a percentage. The ants tend the aphids, taking their own cut in the form of honeydew, in return for protecting the aphids from ladybirds and other predators. Replete, the ants return to their nests.

Inside, at the heart of the citadel, resides the queen, the oldest and most venerated member of ant society. The colony is organised around her needs alone, thousands of loyal subjects programmed to protect, feed and pamper her, their roles and responsibilities passed down through short-lived generations while she lives on for decades. One narrow-headed ant queen was known to have lived for 27 years, I could hear John saying.

At some point that day, having acquired a new enthusiasm of my own, I realised why I had changed my mind about retiring once Back from the Brink got started. The plan had been to finish the funding application, help appoint a team to manage the programme, say my farewells and get writing. But perhaps I could manage another four years, or, thanks to Covid, five….

Change Manager - Back from the Brink