The last few weeks of freezing temperatures and plenty of snowfall have evoked memories of the ‘Beast from the East’ storm which hit the UK roughly this time in 2018. It was at this time that the Willow Tit project had hit its momentum with the radio tracking programme, and we had already caught and ringed nine Willow Tits. Whilst the cold snap affected our main survey, where we rely on birds responding with a call to a playback recording, we were able to continue tracking, as the technology did the work for us and we didn’t actually need to see or hear the bird to know it was there.

Surprisingly, one of the most interesting Willow Tits tracked was during this cold period, with snow on the ground for much of the 11 days it was being studied. That bird was fitted with its colour ring combination (Red-Dark Blue) and was tagged as #308 (not very catchy… Bob? Sure, why not). Bob was caught the day Beast from the East arrived, 22 February 2018, at Carlton Marsh nature reserve just north of Barnsley town centre.

Freshly fitted with the radio transmitter, Bob spent some time in the scrub with another Willow Tit which had been fitted with colour rings (Red-Yellow) in November 2017. Not long after, it seemed to get bored with Carlton Marsh and zoomed over the main road, using a thin scrubby track next to the scrap yards and into the plantation known as Pool Ings (if you read my last blog, you’ll know that this is the site where the Willow Tit known as Red-Grey called home when he was tracked in 2019). 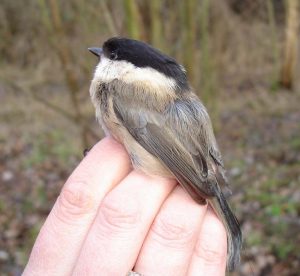 The following day, Project Assistant and radio tracker Vivien, started the day up at Pool Ings where Bob skulked in the undergrowth. At some point it travelled back down to Carlton Marsh where it spent some time around the feeders before belting it back up the scrubby corridor to Pool Ings. Poor Vivien had to run to keep up with the bird as it flew down the corridor – it wasn’t wasting any time moving from one site to the next! Bob was spotted spending some more time with Red-Yellow, possibly its mate, and called several times, but spent most of the day in bramble without much activity. The next day saw much of the same – very little. Vivien could be standing within metres of this bird, close enough to touch it, but without the radio transmitter you wouldn’t have a clue it was there. No noise, no obvious movement in the scrub. Bob spent three hours in the same spot, the northern-most point of Pool Ings, possibly moving between the scrub and some nearby garden feeders.

On the fourth day of tracking, Vivien lost the radio signal as once again Bob flew between Pool Ings and Carlton Marsh. Luckily, the receiver picked it up back at Carlton Marsh, where it was feeding six metres high in the tops of some hawthorn. A couple of hours later and it returned to Pool Ings. Who knows what it was doing, as Vivien went four hours incredibly close to its location, but not once able to see how it was behaving. Willow Tits seem to have a habit of disappearing for hours on end, no wonder they are such a pain to survey!

The next day was when the Beast from the East really took hold, and Barnsley was hit with prolonged snowfall. Vivien persevered however, and for the first day since we started tracking it, Bob remained in at Pool Ings all day, not bothering with its usual commute down to Carlton Marsh. The bird often visited garden feeders throughout the day, possibly due to the thick snow cover limiting the usual food source. It also spent a lot of time simply sheltering from the snow in the undergrowth, occasionally popping out to check the weather before thinking “nah” and returning to its hiding place (we’ve all been there…).

Unfortunately, the weather got very bad after that, and fieldwork just wasn’t doable. Vivien returned a week later, now in early March, and fortunately the tracker was still on and working, as Bob was found already down at Carlton Marsh first thing in the morning. After spending some time in the usual bramble and hawthorn patch, it crossed over the road to head back to Pool Ings. This time though, it seemed to take its time slowly moving along the scrubby corridor, maybe it felt sorry for making Vivien sprint this track every other time it whizzed through here.

Over an 11-day period, Bob covered an impressive 6.98ha and on most days would venture 1.5km from the top end of its home range (Pool Ings) to the bottom (Carlton Marsh). It spent most of its time lurking in the northern area, which is likely where the core of the breeding territory is established but would travel a decent distance almost daily to feed and forage for a couple of hours.

These two sites are connected only by a thin strip of young scrub along a former railway embankment, but it shows the value of these linear corridors in the wider landscape and, particularly when the surrounding area consists of industrial scrap yards and bare arable fields, they are a lifeline to species with limited mobility. Bob was paired with another Willow Tit and was often seen with adjacent territory holders in both the northern and southern parts of its range. 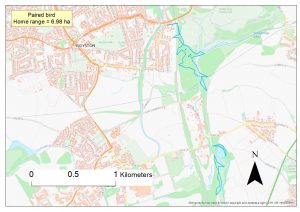 Willow Tits require large areas of habitat to thrive, Bob being the perfect example of the sort of landscape network needed to support nesting and foraging. One of the factors contributing to their dramatic decline is loss of natural nest sites, in particular, clearance of deadwood. Willow Tits do not use nest boxes, as they need to excavate a nest is soft rotting wood. With National Nest Box Week coming up, why not try something different to help Willow Tits? If you manage local greenspaces, try and retain some standing deadwood where it is suitable to do so. You could even try strapping rotting logs to living trees to provide more nesting opportunities. Installing more nest boxes every year will likely be a detriment to Willow Tits, as they attract more competitive species, such as Blue Tit and Great Tit, which often chase Willow Tits out of nest sites and will outcompete them for food resources. 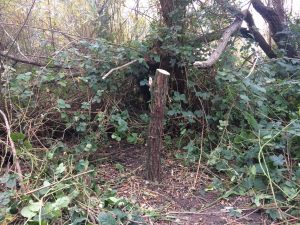 Yorkshire Wildlife Trust and Back from the Brink Willow Tit