Last September we happened to chance upon Graeme Lyons at the Knepp Castle Estate with a film crew (as you do), while he was carrying out a saproxylic invertebrate survey on behalf of the Ancients of the Future project. Saproxylic invertebrates are dependent on dead or decaying wood for part of their lifecycle (or dependent on those that are dependent on decaying wood for part of their lifecycle).  This is very niche group to say the least, and not many people will be aware of the work that goes into monitoring their populations. That is why Dr Ross Piper jumped at the chance to find out more about Graeme’s work at Knepp and the needs of these fascinating species. 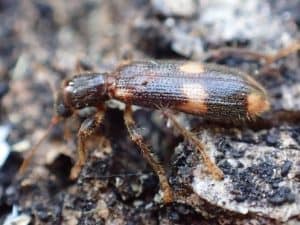 The Knepp Castle Estate in Sussex is one of 19 key sites for the Ancients of the Future project. To understand the needs of the saproxylic invertebrate species present on site, Graeme carried out a series of surveys last summer in the central area of the Estate also known as Repton Park, the original parkland around the castle where there is a large density of veteran trees.

When surveying for saproxylic invertebrates, the best place to look is in and around deadwood and veteran trees with a good amount of decay present. They can be very hard to find due to most saproxylic species spending the majority of their lifetime as larva deep within decaying wood and less time in their adult form.

One way to sample these elusive creatures is to catch them during flight using aerial interception traps. A series of these traps are situated in tree canopies or by deadwood in the perfect stage of decay, making an attractive feast for beetles and other invertebrates. The traps are left there over the summer, capturing insects that fly into the trap, day or night.  The insects drop down a funnel into a killing jar which can be removed and replaced regularly throughout the season and specimens processed for identification. This may seem a counter-intuitive approach, after all the work is taking place to protect these species but due to their elusive nature and technical skill required to identify them, taking a small sample of what exists is crucial if we are to better understand their needs and provide appropriate protection in the future.

Graeme visited the park on many occasions between May to September primarily to collect and reset four interception traps but while out used other survey techniques to record species in the field such as beating Hawthorn in May, searching deadwood timber stacks, light trapping and searching trees at night. 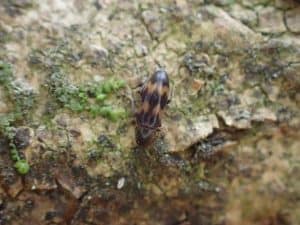 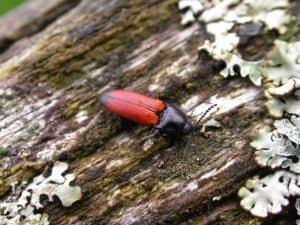 The day we visited Graeme was resetting a trap placed on a recently fallen veteran Oak in the perfect state of decay near a block of mixed woodland. It was in a sunny glade, created by a gap in the canopy from when it fell. The tree was especially large and as a result there was a huge amount of timber with one very convenient branch that the trap could be hung from.

Graeme said “the number of burrows of Oak Pinhole borer (Platypus cylindrus) that appeared on this tree by the end of summer was remarkable, showing that the tree is at a critical stage in decay for recording deadwood invertebrates”. He also recorded a Nationally Scarce Cylindrical bark beetle (Colydium elongatum) and 15 other species with conservation status. 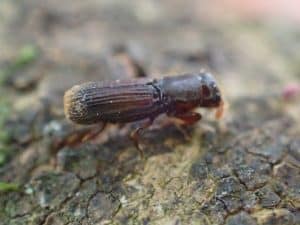 “There are many idioms that involve clearing out deadwood, by definition it is something we have come to see as having no value other than for firewood, but this tree is providing an important habitat for rare saproxylic species. If people want to help our woodlands then they should leave deadwood where it occurs naturally”.

Ancients of the Future Outreach Officer