On a beautiful, sunny afternoon in June 2019 we attended a Colour in the Margins Arable Plant meeting and farm walk in Somerset. Before heading off around the fields we were asked if anyone had experience of managing AB11 plots. It’s not just the BBC’s ‘Line of Duty’ who have their acronyms! AB11 is a Countryside Stewardship Higher Tier Arable Option - ‘Cultivated Areas for Arable Plants’.

We mentioned we had started AB11 on four separate plots on our mixed farm in Autumn 2016.  One plot of 2 acres proved very successful producing several Corn Buttercup plants.

The roughly triangular plot, a rather unproductive, heavy clayey corner of a good arable field, right next to housing, with a very well-trodden public footpath across one side was ploughed in the Autumn and left to weather over the Winter. By Spring it was a rough, lumpy, sparsely covered plot with a cracked surface, and I can’t say it looked in any way promising to me! 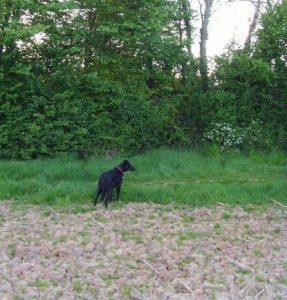 However, a local dog owner, whose aged pet was content with a slow walk along the nearest footpath, spent a lot of time looking down at the vegetation along the path while the dog pottered about. Luckily the dog owner is also a wild plant enthusiast and she spotted something different...the Corn Buttercup, a Critically Endangered plant. 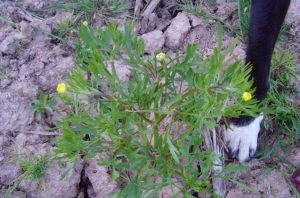 In traditional village networking style I was approached while packing up my hymn book after church one Sunday morning in April. Expecting a telling off about some agricultural misdemeanour I was very pleasantly surprised to find that we had possibly been responsible for an environmental success! A second opinion was sought from a more experienced local botanist. Natural England were informed and the BSBI Vice County Recorder and our Natural England Countryside Stewardship Adviser visited. The presence of Corn Buttercup Ranunculus arvensis, a Critically Endangered plant was confirmed.

Two of the four plots - as cultivated, uncropped areas with suitable soil conditions - have been selected by the Colour in the Margins project for the re-introduction of Spreading Hedge-parsley Torilis arvensis.

So, on a very hot day in mid-September Colour in the Margins Project Officer Alison Mitchell, Joe Bullard and I spent a day mixing Spreading Hedge-parsley seed with sand, marking out sub-sections in the two chosen plots, broadcasting the seed by hand and firming in the seed by treading over the sown area. Assessment of their success  is awaited this summer.

To manage all the plots we rely greatly on a team of various people and machines. In common with many farmers we do not employ lots of staff to carry out work in house and rely on contractors for specific tasks. An agricultural contractor has been employed to plough the plots with a large John Deere 6250R  275HP tractor, pulling a 5 furrow plough, and harrow using a 3m Kverneland power harrow with a packer roller. We  also used a smaller classic 1974 County 4000-Four tractor and 1968 2 furrow Huard HB1 plough, renovated by a member of staff with an interest in machinery, to plough the plots ourselves. This should give us more flexibility to deal with the vagaries of the weather and help alleviate time pressures during the busy seasons of harvest, autumn and spring cultivations.

Colour in the Margins is part of the Back from the Brink programme, funded by the National Lottery, and led by Plantlife in partnership with the RSPB.